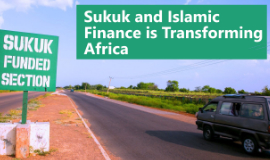 Sukuk are financing infrastructure projects across Africa and contributing to socially useful ventures across the continent.

Issued in local currencies sukuk are being used to fund infrastructure projects. A 2017 issuance for N100bn was heavily oversubscribed. The Federal Government of Nigeria has issued a number of sukuk, the proceeds of which have funded 28 road projects across Nigeria.

Hassan Usman outlines why Sukuk provide greater compliance and little room for corruption and loss of funds as compared to traditional bonds. The sukuk project has to be executed as it is from the benefit of it such as establishing a road or a school which you now lease to take a toll from which revenues are generated and returned to investors. In the case of a bond, it is debt on the government even if it wasted, the government has to repay it and no infrastructure asset would have been developed. A sukuk has to be put to use as the structure is such that you cannot divert the funds which you raise from it for any other purpose but the purpose for which it was raised.