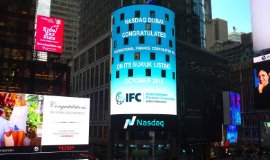 Since the issuance of the first modern sukuk in 1996 cumulative issuance of sukuk has crossed the US$ 1 trillion mark.

As of the end of 2018, outstanding sukuk were valued at US$ 469.7 billion across 2,887 sukuk. Sukuk issuances during the year reached US$ 124.8 billion, a similar level to the previous year.

The Saudi and Malaysian governments were the largest issuers in 2018, at US$ 17.1 billion and US$ 13.9 billion, as stated in the Islamic finance development indicator report for 2019 produced by the Islamic Corporation for the Development of the Private Sector, part of the Islamic Development Bank. Malaysia maintained its lead position in terms of issuances, boosted by the return of short-term murabaha sukuk from Bank Negara Malaysia. The central bank resumed sukuk issuances after a three-year hiatus. It issued US$16.1 billion in shortterm sukuk during the second half of 2018.