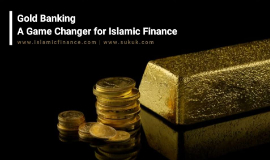 Traditionally gold is passed down the generations in Islamic cultures, but as an asset remains stored in vaults and not active in the wider economy. Islamic finance gold banking offers the potential to convert many billions of dollars of idle “under the mattress” gold assets into mainstream economies thereby increasing economic activity and participation.

Turkey is the leader in the use of gold within Islamic finance markets.

Turkish gold backed sukuk and retail gold banking products have integrated idle gold assets into the economy making a significant contribution to the gold reserves of the Central Bank of Turkey.

Integration of gold into a feasible mainstream asset class offers unbound potential for Islamic finance as a permissible asset class for financial planning and trade.

Turkish Islamic bank, Kuveyt Türk began offering gold banking in 2007 and has collected over 26 tons of gold (worth around $1.2 billion – July 2019) and integrated it into the Turkish economy. The total amount of gold held in the financial system is estimated around US $100 billion.

Kuveyt Türk customers can use gold accounts to make regular gold savings on credit or debit cards as well as trade physical and virtual gold. Physical gold coins can be withdrawn from ATMs or purchased digitally and a gold cheque book allows for transfers to non-bank customers. The banks tour the country educating the population with the of objective of increasing awareness on gold banking and financial literacy.

The bank targets women in a series of commercials titled “Golden Dreams” and regularly arranges “gold days” to promote the integration of gold into the economy.

In 2016 the World Gold Council and Accounting and Auditing Organisation for Islamic Financial Institutions (AAOIFI) approved the sharia standard for gold-based products with the objective of increasing the use of bullion in Islamic finance and the creation of new financial instruments. The standard addressed the use of collateral, and the exchange of gold in spot and deferred transactions.