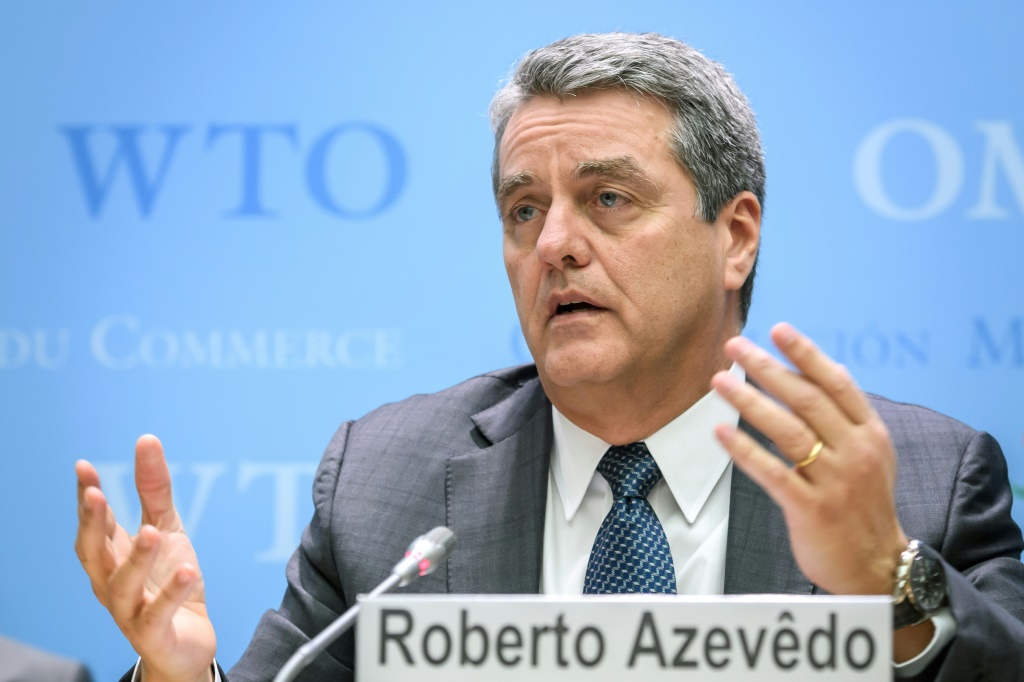 The World Trade Organization chief announced Thursday he will step down on August 31, a year before his term ends, despite the COVID-19 pandemic ravaging the global economy.

Roberto Azevedo said it had been a "personal decision" reached with his family, and stressed that he was not leaving to pursue "political opportunities".

"This is a decision that I do not take lightly," Azevedo told member state representatives, according to a written version of his speech.

Azevedo's early departure will come at a time when the coronavirus pandemic has pushed the global economy and international trade into turmoil, facing downturns not seen since the Great Depression.

Global trade, already hit by political tensions and uncertainties around Brexit, is expected to register "double-digit declines" in volumes in nearly all regions this year, the WTO said last month.

The 164-member organisation was already in crisis before the pandemic hit, dealing with raging trade wars and scathing criticism by United States under President Donald Trump, who has pushed for reforms of the Geneva-based body.

Referring to Azevedo's announcement, Trump told a White House briefing Thursday that "I'm ok with it," adding "The World Trade Organization is horrible".

Azevedo meanwhile said he was "convinced that this decision serves the best interests of this organisation."

The 62-year-old Brazilian career diplomat, who became the WTO chief in 2013, suggested that an early change of leadership would help it face "new post-COVID realities".

He also insisted his move would avoid weighing down the WTO's 12th ministerial conference next year with the difficult process of finding his successor.

"My departure in August will give you the time you need to work with my successor -- whoever she or he may be -- to shape the strategic direction for MC12 and the months and years that follow," he said.

He said that the current slowdown in activity due to measures taken to curb the COVID-19 pandemic offered an opportune time to seek his replacement.

EU trade chief Phil Hogan said in a statement that he agreed.

"It is essential that we quickly chart a new path ahead at this critical and uncertain time for trade. It makes sense to proceed now with the succession process rather than wait until next year," he said.

Not everyone agreed the timing was right, however.

He pointed to "existing tensions, in particular the scathing criticism from the US president, violations of many agreements, the US-China trade war and the paralysis of the appeals body."

Azevedo, who before his appointment as WTO chief spent five years as Brazil's ambassador to the organisation, has enjoyed a reputation as a consensus-builder.

During his first term he dedicated much energy to trying to unblock long-deadlocked trade agreements.

The WTO has for nearly two decades failed to conclude the Doha Round of trade liberalisation talks.

However, on Azevedo's watch, WTO members did conclude their first ever multilateral agreement when they reached a deal in Bali in late 2013 on overhauling global customs procedures.

But since his second term began in 2017, countries have failed to reach further multilateral agreements, and the WTO has struggled to deal with a US administration openly hostile to its multilateral approach.

The WTO was forced to put its dispute settlement appeal system on ice last December after Washington blocked the appointment of new judges, preventing it from reaching a three-judge quorum.

"Despite the many shortcomings of the WTO, Roberto has led the institution with grace and a steady hand. He will be difficult to replace," he said in a statement.

Many observers are already betting on a candidate from Africa -- and against a WTO insider.

One diplomatic source told AFP that there appeared to be a clear "consensus" that the next leader should not come from "a big economic power", and certainly not from China or the United States, in light of their trade war.