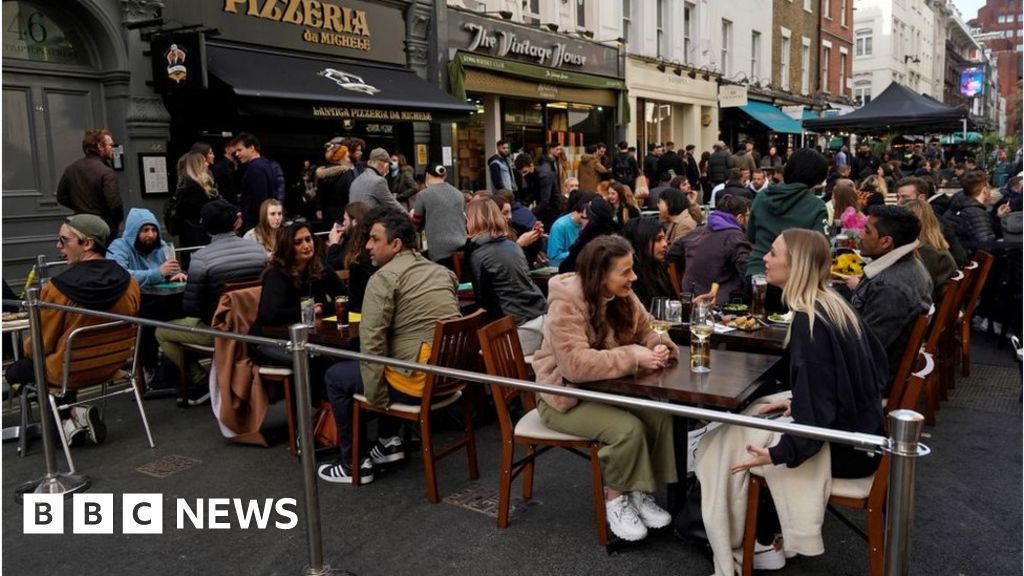 The UK economy will enjoy its fastest growth in more than 70 years in 2021 as Covid-19 restrictions are lifted, according to the Bank of England.

The economy is expected to expand by 7.25% this year, with extra government spending helping to limit job losses.

Andrew Bailey, the governor of the Bank of England, said the recovery was "strong" but likened it to "more of a bounce back" than a boom.

He added that the surge in growth, while "good news", would only return the UK economy back to its 2019 size.

Mr Bailey told the BBC: "We're going to see a continued strong recovery this year, but let's put that into perspective.

"That's two years passed with no growth in the economy."

His comments came as Bank policymakers held interest rates at a record low of 0.1%.

The Bank expects the recovery to gather pace as the reopening of high streets paves the way for a mini-spending boom.

Growth of more than 7% this year would represent the strongest expansion since official records began in 1949.

Chancellor Rishi Sunak announced in the March Budget that the furlough scheme, which subsidises employees' wages, would be extended until the end of September.

Mr Bailey said the extension would limit the rise in unemployment "significantly" by providing a "bridge of support that will last until the recovery is underway".

The Bank now expects the unemployment rate to peak at 5.5% later this year. This is far below the 7.75% it predicted in February.

Mr Bailey added: "Longer term unemployment is one of the most difficult things to deal with. And we think that will be substantially reduced."

The number of people on furlough is expected to fall to 2.75 million in the three months to June, from just under five million at the start of this year.

"Given the expected near‑term recovery in activity, unemployment is projected to increase only slightly," policymakers said in the Bank's latest Monetary Policy Report.

The Bank of England is trying to play down the idea that there is a post pandemic boom, but nonetheless these are very significant increases to the forecast for economic growth this year, and a substantial cut to predicted peak unemployment.

Much of this is "rebound" - the natural and obvious result of large swathes of the economy reopening. But the changes indicate the underpinning of a more sustained recovery too.

The peak in unemployment has been sharply downgraded, from close to 8% to 5.5%, thanks to the furlough scheme extension, a stronger recovery, and an assumption that the long-term damage from the pandemic will be smaller than previously expected.

That means about 700,000 expected job losses not materialising. If this does come to pass, it will far exceed even the most optimistic assumptions from the start of the pandemic crisis.

The Bank also assumes that vaccinated Britons feel safer, more confident and are now spending more of the savings arising from a year of lockdowns.

There are clear uncertainties, relating to virus variants. But the Bank is at least pointing to a summer recovery, with the economic damage from the pandemic repaired by the end of this year.

Households have squirrelled away more than £150bn in extra savings over the past year as more people have worked from home, particularly higher earners.

The Bank expects them to spend about 10% of this extra cash as the economy returns to normal.

However, more than half of those surveyed by the Bank said they would keep the money in savings, suggesting that many households remain cautious about the economic outlook.

Policymakers stressed that the outlook "remains uncertain" and "continues to depend on the evolution of the pandemic".

Non-essential shops, pubs and restaurants started reopening last month as part of a phased easing of restrictions across the UK.

The Bank's survey of businesses showed that "footfall increased rapidly in the first few days of trading", with hairdressers, pubs and restaurants all reporting a surge in bookings.

Anecdotal evidence suggested that many people were also opting to take holidays in the UK instead of overseas, with demand "much higher" than pre-Covid levels.

The Bank also suggested that pay rises were likely to remain subdued this year.

While fewer businesses are freezing pay, the Bank said most were awarding increases of between 1.5% and 2%.

It added: "Where bonuses were being paid, these were generally lower than a year ago."

Recent increases in commodity and factory gate prices, combined with record low interest rates, have raised fears of a bigger rise in the price of goods and services.

Inflation, as measured by the consumer prices index (CPI), currently stands at 0.7%.

However, this is expected to increase sharply towards the Bank's target of 2% in the next few months amid a rise in energy prices.

The Monetary Policy Committee (MPC) that sets interest rates was split on Thursday over the size of its latest round of bond buying, as it announced it will slow the pace of purchases.

Outgoing chief economist Andy Haldane voted for a reduction in the Bank's quantitative easing programme to guard against the risk of the economy overheating.

However, the MPC stressed it would not raise interest rates until there was "clear evidence" that the recovery was sustainable.