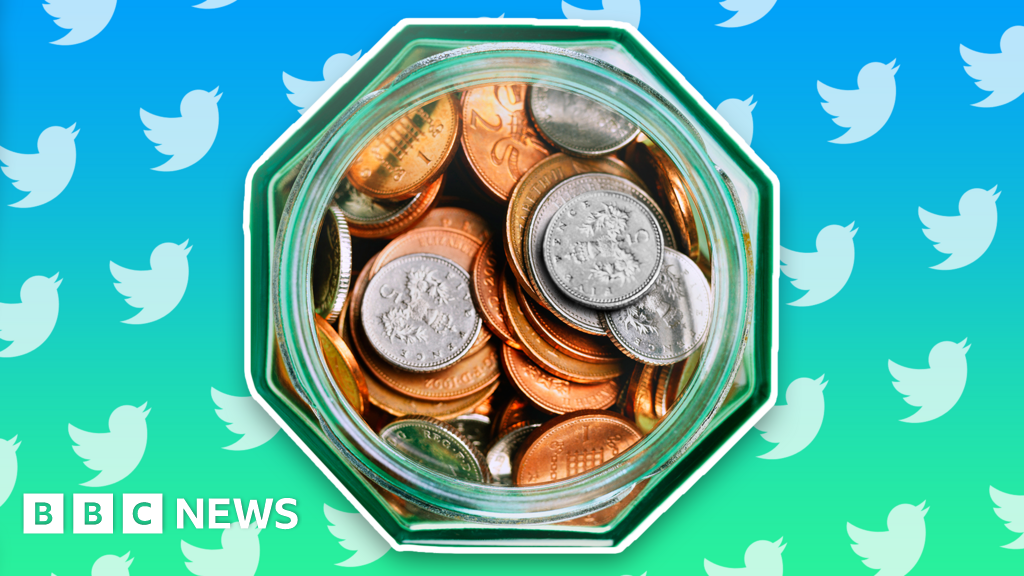 Twitter has launched a new "tip jar" feature that lets people send money to others on the social network.

The company says the feature is "an easy way to support the incredible voices that make up the conversation".

To begin with, only a select group of people can receive tips - a group Twitter said was made up of "creators", journalists, experts, and non-profits.

But the feature has also been criticised for exposing personal information such as email addresses.

The tip jar function essentially adds a small icon to a user's profile - on mobile devices only for now - with a drop-down menu for other payment providers such as PayPal, Venmo, or the Cash App, the latter two of which are popular in the United States.

But because the payment is made through those external systems, some Twitter users noticed that tipping a PayPal account lets the recipient know the postal address of the tip sender.

In other cases, the recipient's email address could be seen, whether or not any money was sent.

After security expert Rachel Tobac highlighted the issue, Twitter product lead Kayvon Beykpour thanked her for the "good catch" - but said Twitter could not control how PayPal handled that information.

Instead, Twitter said it was updating the information around the tip jar to make clear that some details might be shared.

PayPal, meanwhile, said the issue arose because the Twitter tip jar was using its "goods and services" payment option - which shares details for shipping those goods. It said people can toggle to the "friends and family" option during payment to avoid the issue.

The tip jar function also has support for Bandcamp - widely used by musicians - and Patreon, used by all sorts of independent digital creators such as YouTubers and podcasters.

Twitter says the addition was inspired by people who added payment links or Patreon ads in replies to viral tweets.

"We $ee you - sharing your PayPal link after your Tweet goes viral, adding your $Cashtag to your profile so people can support your work, dropping your Venmo handle on your birthday or if you just need some extra help," wrote Twitter's senior product manager Esther Crawford in the blog post announcing the feature.

It said more people would be able to add the function to their profile "soon".

But there are some concerns about the way the function will be used.

Journalists, in particular, are often banned from accepting gifts - and it's not clear how "tips" will be treated by news organisations.

Seems like Twitter’s tip jar feature is going to raise some issues for newsrooms. What do people think? Should reporters at your favorite pubs and networks be allowed to accept money from anyone on the internet? Are any prominent MSM reporters using this? Is it ethical?

"Should reporters at your favourite [publications] and networks be allowed to accept money from anyone on the internet?" he asked.

Another reporter writing for a US-based newspaper wrote: "On the one hand... seems ripe for creating unethical situations.

"On the other hand... I don't make a lot of money and it's a tough world out there."

The tip jar is the latest in a string of experiments from the social network, which has seen user growth slow in recent years.

"As a Twitter subscriber, picture getting access to premium features where you can easily read articles from your favourite news outlet or a writer's newsletter from Revue, with a portion of your subscription going to the publishers and writers creating the content," it said.