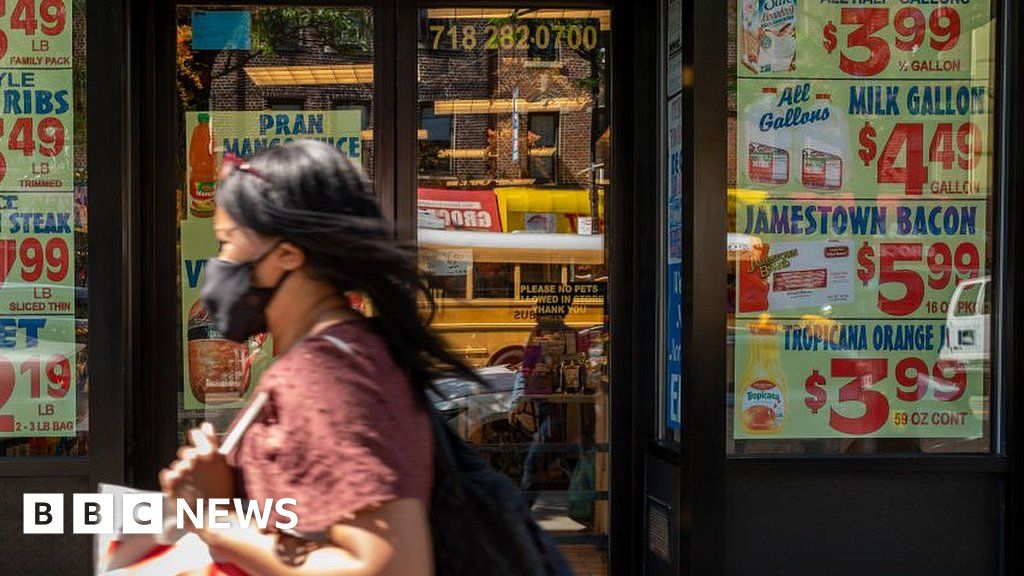 Three in five Americans say the US is in a recession, according to the latest Economist/YouGov poll. So how come it's not official?

Soaring inflation - the highest rate since the 1980s - has soured the mood for many. Some Americans are driving less to save petrol, forgoing pricey organic produce and looking for deals to save a few dollars.

There's more bad news. The once-roaring housing market is slowing, making the equity locked in property less of a sure thing. The S&P 500 has also taken a hit. The index is down 19% for the year, disappearing trillions in wealth and suddenly making everyone from young investors to soon-to-be retirees sweat.

But this may just be a recession in mood only, as the official governing body in charge of declaring remains quiet on the issue.

What is a recession anyway?

In a growing economy, a country's citizens become slightly richer on average as the value of the goods and services they produce - its Gross Domestic Product (GDP) - increases.

But sometimes that value falls, and a recession is usually defined as when this happens for two three-month periods - or quarters - in a row.

Typically it's a sign the economy is doing badly and can mean that, in the short term, businesses have more layoffs.

So is America in recession?

US GDP has fallen for two consecutive quarters - 1.6% during the first quarter of 2022, and 0.6% the next. In most countries, that's a recession. Just not in the US.

The official recession call is made by the Business Cycle Dating Committee - a little-known group of eight economists chosen by the National Bureau of Economic Research, a non-profit organisation. And so far, the committee has refused to use the R word.

How do higher interest rates affect the US economy?

To lower prices, America's central bank - the US Federal Reserve - is raising interest rates. The idea is that by making it more expensive to borrow money, people will spend less and save more.

This decrease in consumer demand will bring down prices for goods and services that have skyrocketed - but it's taking a while. Even though petrol prices have fallen recently, the cost of food and rents has continued to climb, putting America's central bank in a tight spot.

The Fed is expected to raise its key short-term interest rate by three-quarters of a point for the third consecutive time at its latest meeting, in hopes of quickening the decline in prices. Such a large hike would lift its benchmark rate - which affects many consumer and business loans - to a range of 3% to 3.25%, the highest level in 14 years.

The danger is that, if they go too far, it could choke economic growth and cause a spike in joblessness - a risk fuelling current recession fears.

Recession or not, the question is, what's next? Some see a downturn as inevitable.

"There's never been a moment when we've had inflation above 4% and unemployment below 4%, and we didn't have a recession within two years," former US Treasury Secretary Larry Summers said recently.

He expects a "long and ugly" recession that could last until 2023 and tank stocks by 40%.

The case for a soft landing

Despite the dire warnings, there are plenty who believe a "soft landing" - a moderate economic slowdown, instead of a full-on recession - is still possible. Under such a scenario, you might see slower growth without the upheaval associated with a full-blown downturn.

Driving that optimism is America's strong job market. Employers added 315,000 new workers in August. That's hardly a sign of a sputtering economy, according to US Federal Reserve Governor Christopher Waller.

In a recent speech in Vienna, he dismissed recession fears, saying: "The robust US labour market is giving us the flexibility to be aggressive in our fight against inflation."

The Fed has said it won't hesitate to keep interest rates high, for as long as it takes to drive down inflation. With the US central bank preparing to show it won't flinch in its resolve to lower prices, the process is unlikely to be smooth. If it raises rates by too much, the economy could plunge into recession. Raise them by too little and inflation continues to soar.

The Federal Reserve Bank of Atlanta President Raphael Bostic acknowledged it was a difficult high-wire act to pull off, saying recently that a soft landing is "a very hard thing to do".