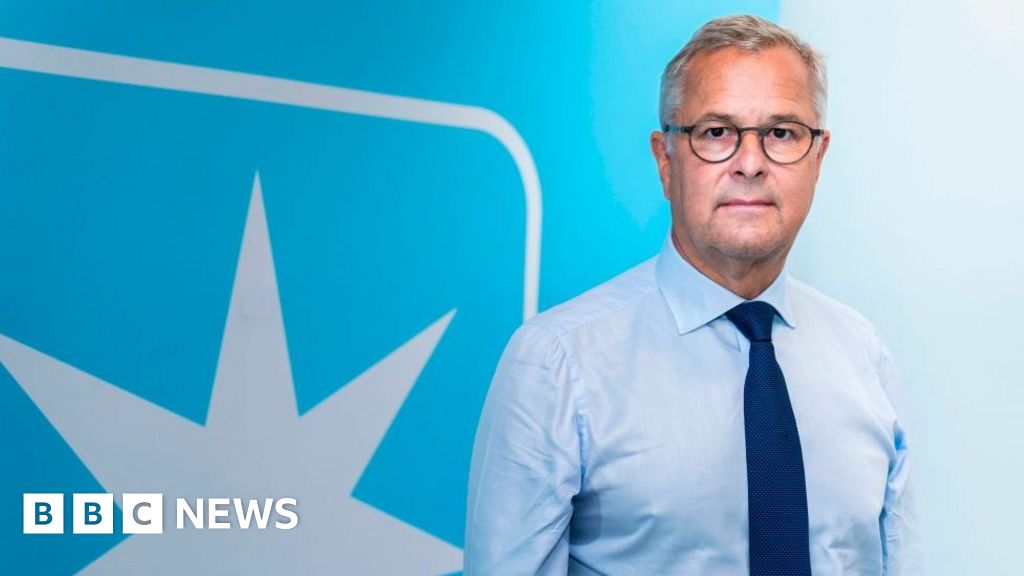 The boss of the world's biggest shipping firm has told the BBC people would be willing to pay a little bit more for their goods if it helps tackle climate change.

From footwear to medical equipment, shipping can be a big part of any product's carbon emissions.

The industry as a whole accounts for about 2% of the global total.

That means that if it was a country it would be the sixth biggest polluter, above Germany.

Maersk chief executive Soren Skou says that for his company the extra costs of greener energy amount to billions of dollars but "for the individual consumer, for the individual product, it will be almost nothing."

It "would in a container with sneakers from Vietnam, translate into something like six cents per pair of sneakers. So I don't think that it will really impact the consumption opportunities for consumers out there. "

He says "I'm absolutely sure that this is doable, from a consumer point of view".

Mr Skou says his company has "an ambition to decarbonize global logistics".

At the moment they spend $4bn (£2.85bn) a year on fuel but to go carbon free "we have to spend maybe double" that amount. Covering those extra costs would mean the prices Maersk charges its own customers would need to increase 20%.

That led Maersk's profits to soar 44% to more than $8.2bn, the vast majority of which came from transporting goods by sea.

Those profits are already being invested in reducing emissions.

The Danish company recently announced it plans to launch the world's first carbon-neutral liner vessel in 2023, which will have a methanol engine.

Prof Alan McKinnon of Germany's Kuehne Logistics University says "the use of methanol certainly offers a longer-term pathway to decarbonised shipping but only in its renewable forms, which are currently in very short supply. Scaling up production and distribution will require huge capital investment and take many years."

The shipping industry as a whole is working on a $5bn plan to fund zero-emission vessels.

Prof McKinnon, one of the authors of a 2014 report by the Intergovernmental Panel on Climate Change (IPCC) adds: "Efforts to decarbonise logistics also need to be intensified across other parts of the logistics industry".

Although 2020 was, says Mr Skou, "a really unique year, in the first two-thirds of the year, actually, global trade was down in volume terms".

However things recovered with "quite a jump in the US", and he thinks government stimulus cheques "will drive even more consumer spending on goods." That's important because American consumer spending accounts for about 11% of the global economy.

However, because "freight rates have skyrocketed the industry at large is set for a year of bumper profits".

Nonetheless Mr Skou does have concerns about the potential for interruptions to global trade because of the pandemic.

More than 200,000 seafarers, the crew who staff ships, are currently stuck at sea beyond the end of their contract.

Last month, Maersk was one of more than 300 companies and organisations who labelled their fate a "humanitarian crisis at sea" and urged all governments to treat them as key workers.

Mr Skou doesn't think the world is yet in danger of running out of crews but stresses the need to allow them to move more freely.

"Think about the alternative, if we're not able to keep global trade moving, then we would quickly run out of food, and many other essential products"

For Maersk, the problem peaked last summer. "We at any given time have 6,000 people on the ships. 55% of them were out longer than the longest duration of their contract, and we had fixed the problem by Christmas."

Maersk can afford mitigations that smaller companies can't. That means there are "hotels that we have leased in the countries where most of our members come from, so that we can isolate them. Before they go on board, we can test them".

That means "we know that they don't have the virus when they get on board the ships". With airline flights vastly reduced Maersk is also chartering planes.

However a fresh wave of infections means seafarers are getting stranded again. So "the seafarers are really bearing a lot of the problems on their shoulders". That means even without greener ships there are hidden costs to the incessant demand to move everything from toys to electronics around the world.