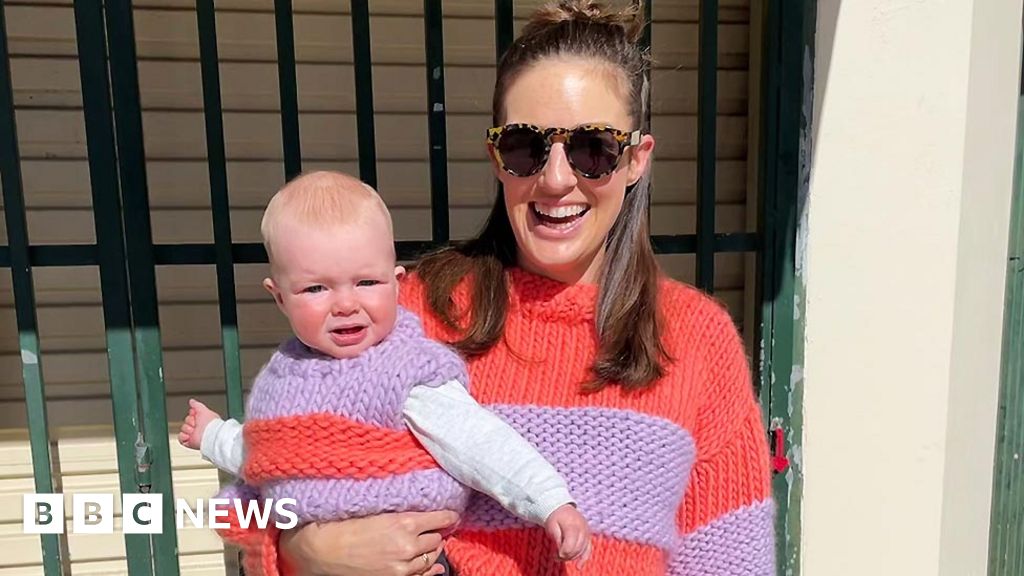 "I was on maternity leave and stuck in lockdown, so, for me, it really provided a way to ease my anxiety, keep busy and feel a sense of achievement," says Alice Smith, 34, who spent almost four months locked down in Sydney, Australia earlier this year.

With much of the world facing travel restrictions and in need of a break from doomscrolling and Netflix, many turned to hobbies as a way to soothe their work-from-home burnout.

Ms Smith explains how her new found enthusiasm for knit-one-purl-one takes her mind away from worrying or multi-tasking. "It also uses your hands - so you can't look at your phone."

A craft that many thought peaked in the mid-20th century is booming - there's hope it may even give the beleaguered wool price a lift too.

LoveCrafts, a British company with offices in Germany, the Ukraine and the US, reports a 166% jump in orders year-on-year as people turned to sewing and knitting during repeated lockdowns.

John Lewis also saw gains in sales from its craft department, with sales of crochet hooks up 36% in August - not traditionally a popular month for wool products in the UK - while yarn sales rose 14%.

Meanwhile, data from market research firm, Mintel, show crafting has also seen a surge in engagement in the US. According to its most recent Arts and Crafts Consumer Market Report, younger consumers were driving sales of yarn.

The woolly trend has spurred growth for some smaller fashion businesses.

One of these is Melbourne-based Cardigang, founded in late 2020 by friends Morgan Collins and Kat Bloxsom, after they taught themselves to knit during the pandemic.

"We launched in December 2020 in the middle of the Australian summer - the hottest day of the year!" Ms Collins tells the BBC.

Both in their early thirties, Cardigang started as a side hustle in addition to their day jobs in marketing. "In our first six months, if we could sell 100 kits a month we'd be doing well," Ms Collins says.

But now they're selling over 100 kits a week at roughly $A200 (£109) each, to countries as far afield as the US, UK, Norway and Finland. They are hoping to soon be able to quit their day jobs.

Demand has come from male customers as well as women, and the company is launching a men's range.

"We've had a lot of guys contact us asking to modify our patterns. They saw their girlfriends knitting and they got jealous," Ms Collins explains.

Australia is still one of the world's biggest wool producers. A post-war wool boom led to overproduction and a glut of supply, eventually causing Australia's Wool Crisis in 1990-1991 when prices crashed. Since then, with the arrival of cheaper synthetic fabrics and blends, global wool prices have never fully recovered.

However, this year, although volatile, the wool price in some markets has picked up a little, rising almost 15% since January - so much so that it's made business planning tricky for start-up Cardigang.

"Global wool prices are in constant fluctuation," Ms Collins tells the BBC. "This is something we're constantly assessing, and it is a bit of a gamble with knowing when to invest, versus holding off in the hope that the prices will drop, or the Australian dollar will improve."

The company - which sources its needles from China and sends wool there for processing - has also been hit by the global supply chain crisis.

Still, as Australia approaches it's summer, Cardigang is moving into patterns for warmer weather, as well as sourcing yarn for cotton and sleeveless clothing.

Speaking of unlikely climates for chunky-knit enthusiasts, there's also been a surge in popularity in humid, balmy Singapore.

"There's definitely been an increase in interest," says Elsie Lin of Elsie Departmental Store in Singapore. Her parents named the small craft store after her when they started it more than three decades ago.

She explains that while the 1980s was knitting's heyday, it's definitely making a comeback. "At the moment, everyone is so excited to do it because they can get something out of it. And many parents are encouraging it as they don't think digital is very good."

Ms Lin's sales have increased 30% since the pandemic began. Her knitting and crochet classes, which operate on a first-come-first-served basis, are near impossible to get into.

"Crochet and knitting have been a very beautiful experience and craft for many people. It helps them de-stress," she says. "Doctors need to recommend it more - then more people will be interested in it."

One doctor that would recommend it is Meaghan Miller-McConochie, who used it to cope with burnout while working in the medical system in New Zealand during the pandemic.

"This has helped me to slow down, develop a sense of calm, improve my concentration, allowed me a sense of fulfilment and enjoyment and overall has just assisted in improving my wellbeing."

Alice Smith agrees, saying it's a skill she'll return to throughout her life:

"I think it will be something I pick up every now and then if I'm going through an anxious patch and I need to calm that busy part of my mind."