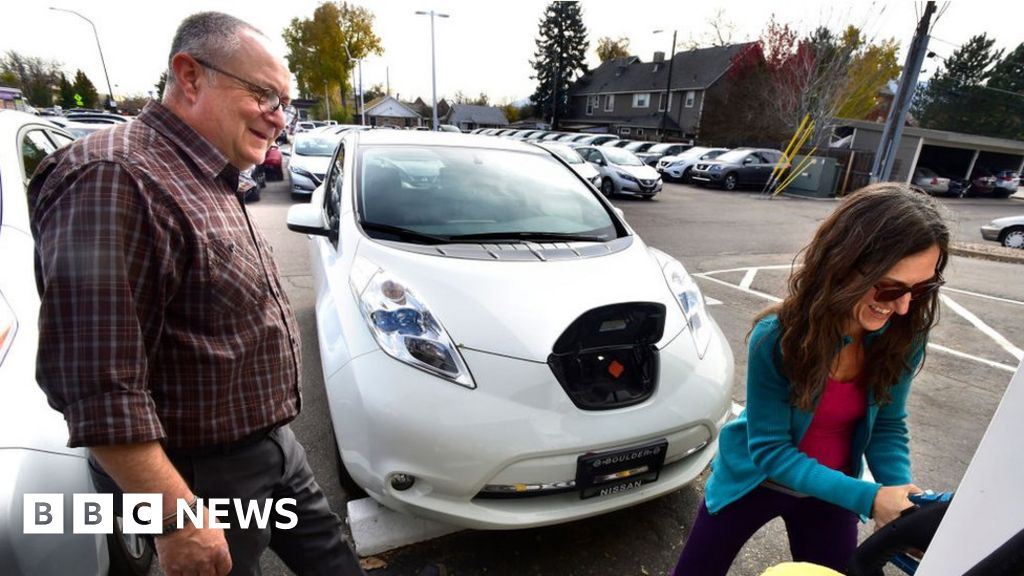 Second-hand car sales have risen this year, boosted by a sharp increase in the number of used electric vehicles on the market.

Sales of used cars in the UK rose 5.1% between January and March, compared to the same three months last year.

But the market for electric cars, which only makes up a small percentage of the overall second-hand market, more than doubled in size.

Electric car sales were "energising" the market, the SMMT said.

The most popular models overall were the Ford Fiesta, Vauxhall Corsa, and Volkswagen Golf. But consumers appeared keen to snap up more environmentally-friendly cars where possible, the latest figures from the Society of Motor Manufacturers and Traders (SMMT) showed.

"Although there is some way to go before we see the recent growth in new EVs replicated in the used market, a buoyant new car market will be vital to help drive fleet renewal which is essential to the delivery of carbon savings," he said.

Plug in hybrids (PHEVs) and hybrids (HEVs) which together make up a larger share of the used car market also changed hands in greater numbers, totalling just under 50,000 vehicles.

Smaller models continued to be more popular for buyers in the second-hand market. Larger multi-purpose vehicles (MPVs) , declined by 7.5%, followed by luxury saloons which were down 3.4%.

Black was the most popular colour choice accounting for one in every five cars sold.

A shortage of semiconductors and other electronic components was holding back supply in the new car market, said David Leggett, editor of specialist news site Just Auto.

He said it was therefore unsurprising that there had been a boom in the second-hand market. "The prices of used cars soared over last 12 months," he said.

The ramp up in sales of second-hand electric vehicles in particular was set to continue over the next few years as more new stock fed through to the used car market, Mr Leggett added.

"We are at a fairly early stage still in terms of the impact of BEVs on the new car market and seeping through to the stock of cars out there," he said.

As challenges within the electric car market over charging and consumer hesitation over adapting to the technology recede, he predicted a "transformation" of first the new and then used car markets.

Used car prices have risen, generally, by 30-40% in the last two years, according to KPMG.

"The increasing cost of living is cooling the used car market slightly, but demand still remains high and is likely to continue to until the issues impacting new car production are resolved and more supply enters the used car market. That is unlikely to be this year," he said.

Northern Ireland: Could The EU And UK Face A Trade War?

As tensions build over Northern Ireland, concerns of a trade war between the EU and UK have surfaced.

Warning Poorest Households Are Struggling To Get £150 Energy Rebate

Surging food prices are a "major worry" for the UK and other countries, Andrew Bailey warns.

Twitter Boss Hits Back On Musk Doubts Over Fake Accounts

Chief executive Parag Agrawal says the firm is confident that less than 5% of users are spam accounts.

The RMT union said the timetable plans could cause "industrial carnage" amid an ongoing dispute.