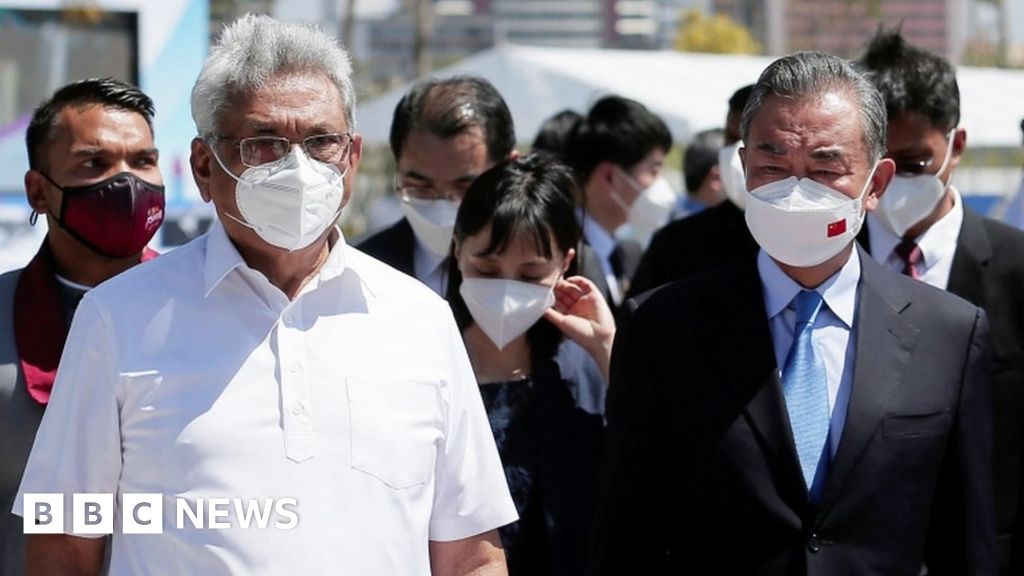 The president of crisis-hit Sri Lanka has asked China to restructure its debt repayments as part of efforts to help the South Asian country navigate its worsening financial situation.

Gotabaya Rajapaksa made the request during a meeting with Chinese foreign minister Wang Yi on Sunday.

In the last decade China has lent Sri Lanka over $5bn (£3.7bn) for projects including roads, an airport and ports.

But critics say the money was used for unnecessary schemes with low returns.

"The president pointed out that it would be a great relief to the country if attention could be paid on restructuring the debt repayments as a solution to the economic crisis that has arisen in the face of the Covid-19 pandemic," Mr Rajapaksa's office said.

The statement also said China was asked to provide "concessional" terms for its exports to Sri Lanka, which amounted to around $3.5bn last year, without providing further details.

Before the pandemic China was Sri Lanka's main source of tourists and it imports more goods from China than from any other country.

In recent months, Sri Lanka has been experiencing a severe debt and foreign exchange crisis, which has been made worse by the loss of tourist income during the pandemic.

The country has received billions of dollars of soft loans from China but the island nation has been engulfed in a foreign exchange crisis which some analysts have said has pushed it to the verge of default.

Sri Lanka has to repay about $4.5bn in debt this year starting with a $500m international sovereign bond, which matures on 18 January.

The country's central bank has repeatedly assured investors that all of its debt repayments will be met and said funds for this month's bond repayment has already been allocated.

Sri Lanka is a key part of China's Belt and Road Initiative, a long-term plan to fund and build infrastructure linking China to the rest of the world.

However, some countries, including the US, have labelled the project a "debt trap" for smaller and poorer nations.

Beijing has always rejected those accusations, and in response has accused some in the West of promoting this narrative to tarnish its image.

Last month a Sri Lankan government minister said the country planned to settle a debt for past oil imports from Iran by paying it off in tea.

In September, Sri Lanka declared an economic emergency, after a steep fall in the value of its currency, the rupee, caused a spike in food prices.

Authorities said they would take control of the supply of basic food items, including rice and sugar, and set prices in an attempt to control rising inflation.

The party unveils proposals to ease the cost of living squeeze, including a £600m contingency fund.

Virgin And O2 Users Will Not Face EU Roaming Charges

Virgin Media O2 says it will not reintroduce fees for mobile data use and calls in EU countries.