Asia-Pacific markets saw mixed trading throughout regional equity indexes on Tuesday and may continue that trend as traders prepare for the highly-anticipated rate decision from the US Federal Open Market Committee (FOMC). Meanwhile, the commodity-linked New Zealand Dollar slipped overnight against the US Dollar.

The Kiwi Dollar may see some pressure after New Zealand posted its largest current account deficit since the June 2008 quarter. According to the DailyFX Economic Calendar, the first-quarter deficit was reported at NZ$-2.895 billion, overshooting the consensus expectation of NZ$-2.23 billion. The figure marks the second consecutive quarterly deficit. Kiwi Dollar traders will now focus on tomorrow’s Q1 gross domestic product release, with expectations at 0.9% for the year-over-year figure.

The trade report from StatsNZ showed the widening deficit can be attributed in part to a rise in the value of imported goods, while export goods values’ failed to recover in a commensurate fashion. That said, the downbeat trade numbers may pose a headwind for NZD/USD. One bright spot is a decline in New Zealand’s investment liability position to $160.9 billion, the smallest since September 2018, according to StatsNZ.

Tonight’s economic docket will see Japan release trade data for May, along with machinery orders for April. Australia will have the Westpac Leading Index for the same month cross the wires after a 0.2% rise last month. To wrap up the day, China will see a range of economic prints, from fixed asset investment to retail sales. However, tomorrow’s FOMC decision out of the United States is the main event risk on the calendar for this week.

The New Zealand Dollar dropped further into an area of support overnight versus the US Dollar. A potential bearish crossover between the 20-day and 50-day Simple Moving Averages (SMA) appears to be on the cards. If the current level of support fails, a drop lower to the 100-day SMA may take place. MACD and RSI are both trending lower on the daily timeframe. 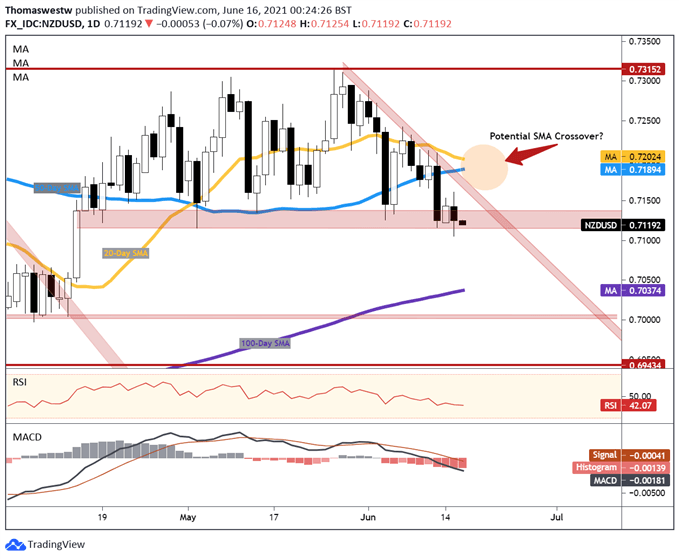