US stocks peeled back across the major indexes on Wednesday as demand for US government bonds picked up. Small-cap stocks led the decline during the New York trading session, with the Russell 2000 closing 2.35% lower, its third consecutive loss. Technology stocks also saw heavy losses, reflected in the Nasdaq 100’s 1.68% decline. Elsewhere, the S&P 500 dipped 0.55%, while the Dow Jones Industrial Average closed nearly unchanged after giving up gains into the close.

Yields on Treasuries across the curve continued to shift lower after Wednesday morning’s note auction revealed robust demand for the 5-year. The Treasury Department auctioned $61 billion, with the bid-to-cover ratio – a measure for demand – ticking up to 2.36 from the prior month’s 2.24 level. The 5-year yield dropped 1.55%, while the closely watched 10-year yield moved 0.85% lower. 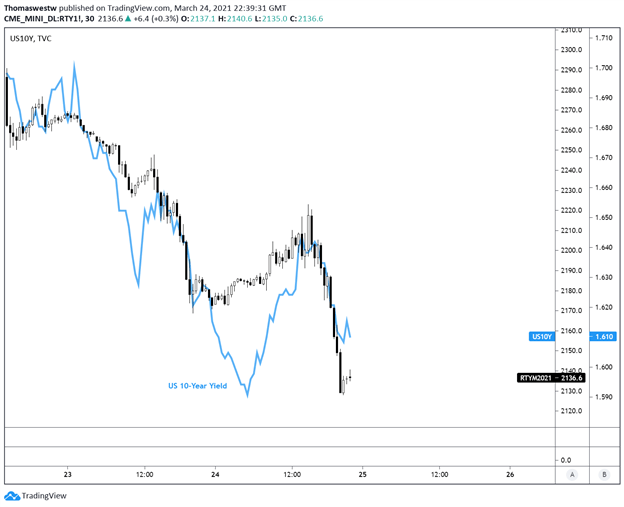 Asia-Pacific stocks appear set for a lackluster open after Wednesday’s session saw most major indexes move lower. Hong Kong’s Hang Seng Index (HSI) dropped over 2% on news that the Chinese autonomous region would suspend Pfizer-BioNTech vaccinations due to packaging defects. The announcement represented another road bump to the major Asian financial center in its effort to vaccinate its population.

Japan’s Nikkei 225 index was another big loser, recording its fourth consecutive loss after closing 2.04% lower. South Korea’s KOSPI fared better but still closed in the red with a 0.28% loss. The Australian ASX 200 index was a bright spot in APAC, gaining 0.50%. The upbeat performance came after the country saw better-than-expected PMI figures cross the wires. According to the DailyFX Economic Calendar, the services sector PMI reading for March came in at 56.2, up from 53.4 in the prior month. 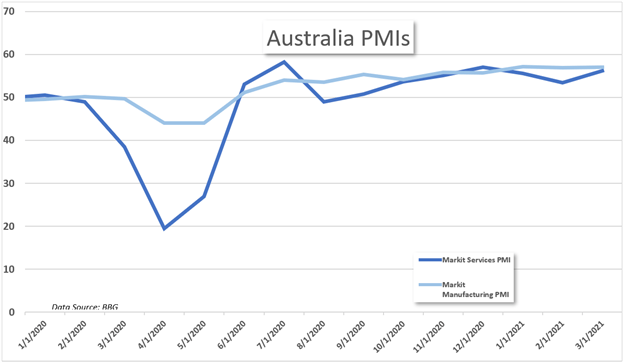 The Japanese Coast Guard reported early Thursday that North Korea may have fired a ballistic missile. Details remain sparse on the event, and markets appear to be unfazed for now. That may change, however, if these preliminary reports are confirmed, as it would likely increase military tensions in the region with global political implications. The economic calendar for today has an interest rate decision from the Philippines and Mexico. South Korea will also release consumer confidence data.

The New Zealand Dollar is adding to overnight losses against the US Dollar following the formation of a bearish Simple Moving Average (SMA) crossover between the 20- and 50-day SMAs. NZD/USD sliced below its 0.7000 psychological level earlier this week, and more downside may be in store with an increasingly bearish MACD reading. 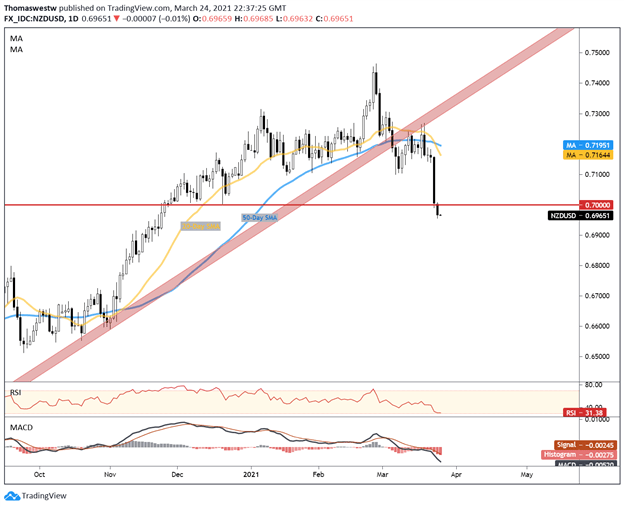