Wall Street moved lower during Monday’s US trading session as investors reevaluate government regulatory risks to technology stocks following last week’s chaos on Capitol Hill. The tech-heavy Nasdaq Composite led the move lower with a 1.25% drop. The S&P 500, Dow Jones, and Russell 2000 also sold off with losses of 0.66%, 0.29%, and 0.03%, respectively.

Investors are mulling over future regulator actions from government agencies against technology companies. Twitter dropped over 6% following the company’s suspension of President Trump’s account. Many US lawmakers have voiced support for increasing regulation on social media platforms, a move that now appears to have more backing than ever. 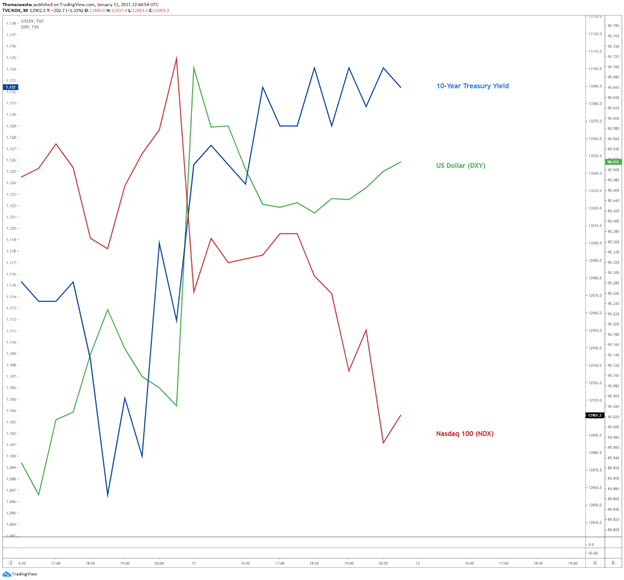 The markets may remain in risk-off mode in the Asia-Pacific session, driven mostly by the rise in US bond yields. The US Dollar is also benefiting from the moves seen in the rates markets, with the DXY index climbing above the 90.5 handle for the first since December. A stronger Greenback typically puts pressure on non-US equities.

Commodity prices are also under pressure thanks to the rising USD. Gold, silver, and crude oil prices fell Monday, with XAU/USD trading below 1850.00, and XAG/USD just below the 25.00 handle. After several days of declines, gold and silver prices may see some relief ahead, but any significant bounce is unlikely without an underlying shift in the trend of Treasury yields.

The DailyFX Economic Calendar shows Japan is slated to release its Eco Watchers Survey for December. India will also see industrial production and inflation data cross the wires. Economists expect the former to drop 0.4% YoY. If the outcome prints better than anticipated, commodities like copper may rise.

The New Zealand Dollar dropped over 1% against the US Dollar on Monday, with NZD/USD slicing below the psychologically important 0.7200 level. Prices appear to be finding some support at the 50% pseudo-Fibonacci retracement level from the late December low – January high. The MACD histogram plotting back to its zero line, which may hint at easing downside momentum. 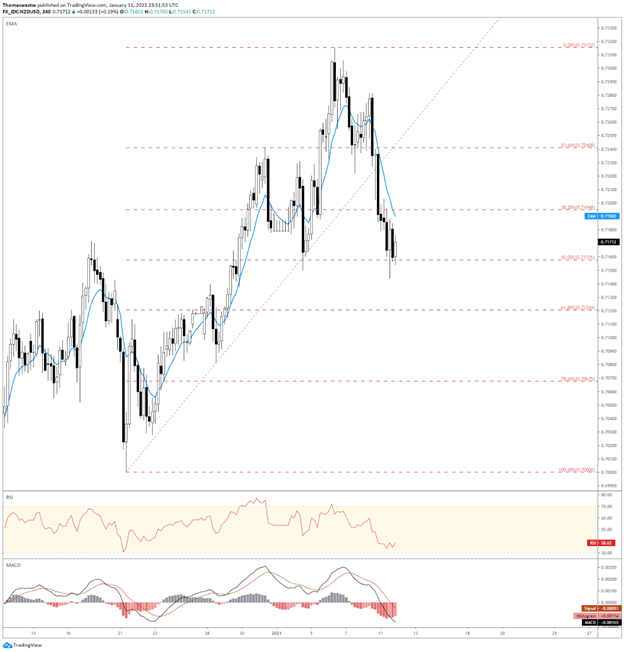 The US Dollar is on the upswing as rising wage inflation and the promise of fiscal stimulus expansion by President-elect...

Increased stimulus bets pushed the US Dollar higher after a shift in the U.S. political landscape, putting pressure on t...

The Australian Dollar may rally with the S&P 500 despite Capitol Hill’s temporary lockdown as markets welcome fisc...