27 DAYS UNTIL THE US PRESIDENTIAL ELECTION

We are now less than 4 weeks until the election on November 3, and polls are indicating a widening spread between Democratic nominee Joe Biden and incumbent Donald Trump. Key swing states are increasingly looking bluer as voters’ confidence in the President’s competence with the economy and Covid-19 fizzles. His diagnosis with the virus following the first debate likely amplified this increasingly-contagious narrative. 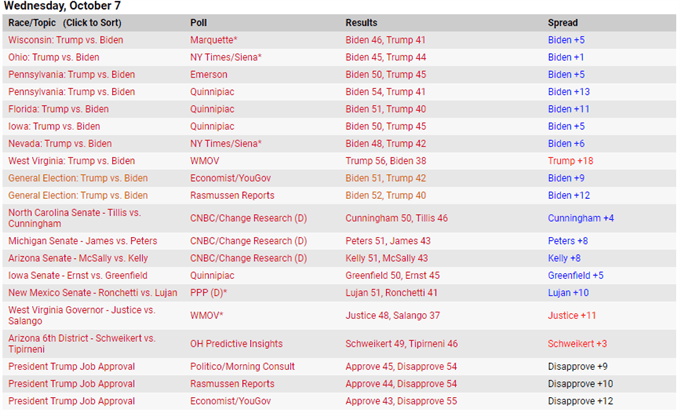 Mr. Biden’s approval has been rising likely in part as a function of the public’s dwindling support and belief in the current President’s ability to contend with high-profile issues. Polling data taken from Ipsos reinforces this idea with Biden outperforming Trump by significant margins on key issues like healthcare and Covid-19. The most recent developments with stimulus talks could be magnifying this dynamic. 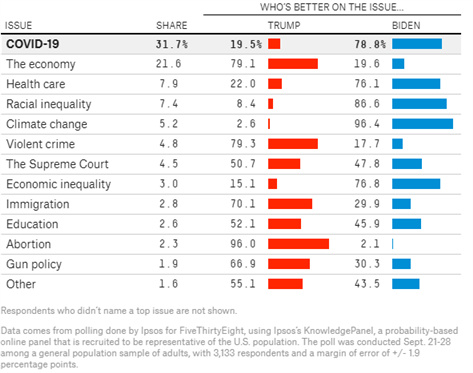 What is Happening with Fiscal Stimulus?

On Tuesday, Mr. Trump instructed key officials in his administration to halt all talks with Democrats on stimulus until after the election. Later that same day, he urged policymakers on both sides of the aisle to come together and pass a stand-alone bill involving another round of $1,200 stimulus checks. He also urged congress to pass additional legislation targeting the Paycheck Protection Program and support for the airline industry.

His sudden reversal was likely the result of him realizing the initial strategy may do more harm than good. Regardless of the new political position he’s taking, it is unclear whether his efforts to undo the harm done to his polls will bear fruit. I warned about such political volatility in a report in September, where I talked about how Mr. Trump may become more unpredictable as the election nears and the desperation to catch up grows.

From a market-oriented perspective, much like what we saw over the past few days, this means greater uncertainty and potential for spikes in volatility. To learn more about how politics impacts financial markets, feel free to follow me on Twitter @ZabelinDimitri.

The vice-presidential debate will be occurring on October 7 from 9:00-10:30 PM ET in Kingsbury Hall, Salt Lake City, Utah. VP Mike Pence will have more pressure on him to perform well on light of the President’s illness with Covid-19. Biden’s running mate Kamala Harris on the other hand will have to defend herself against previous policy stances that hurt her in the Democratic primaries.

After bouncing almost 10 percent from the July swing-low at 10519.5, the tech-leaning Nasdaq may soon be coming up against a familiar stalling point at 11449.3. Clearing that inflection point may open the door to retesting the all-time high at 12074.1 where it topped before rapidly declining and invalidating the March uptrend. 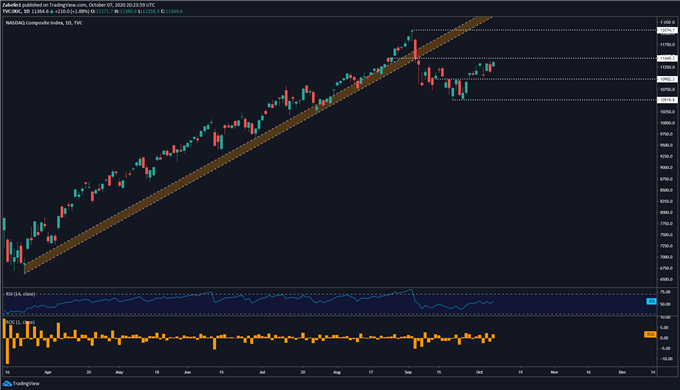 The upcoming debate and its impact on the election may tilt the tech-leaning benchmark slightly more bullish if Harris outperforms Pence and increases the chances of Mr. Biden’s election. This in large part may have to do with the fact that the Democratic nominee’s policy approach relative to Trump brings comparatively less uncertainty when it comes to policy like trade.