26 DAYS UNTIL THE US PRESIDENTIAL ELECTION

The latest polls are reinforcing the narrative that Democratic nominee Joe Biden will win the election as incumbent Donald Trump’s popularity plunges. Multiple polling agencies show the former Vice President with double-digit leads, some as high as 18 points as shown by Data for Progress. Having said that, deep-red states like Texas continue to show Mr. Trump in the lead.

Although recently the state has become more of a battleground and in certain areas is turning from a reddish shade to increasingly blueish; that is, more ideologically mixed. Looking ahead, how each candidate performs in key swing states like Florida and Pennsylvania will be critical. With Biden leading in these states at 11 and 13 points respectively, it buttresses the notion that the Democrats will retake the White House.

The conclusion of last night’s first and only vice-presidential debate between Senator Kamala Harris and VP Mike Pence may also help Biden’s chances. Polls taken after the event showed Harris beating her opponent in terms of both performance and policy. Growing popularity for the VP may galvanize additional support for the Democratic nominee and cause the spread between him and Trump to widen.

The Nasdaq index closed just below an inflection point at 11449.3 after bottoming out at 10519.5. The tech benchmark is also now at a critical juncture between the ceiling and a rising support channel formed in mid-September. Breaking above resistance may inspire additional follow-through if buyers start aggressively entering the market to capitalize on what could be another bullish spike. 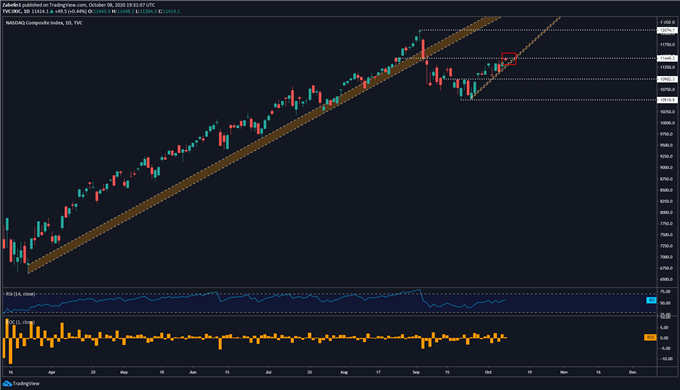 The Nasdaq continues to seesaw with other equity indices over ambiguity of fiscal stimulus developments ahead of the fir...