The safe-haven Japanese Yen attracted attention overnight as traders position their portfolios for this week’s high-profile interest rate decision from the Federal Reserve. Wall Street saw broad losses led by tech and small-cap stocks, with the Nasdaq 100 Index shedding over 1% off its value. US-listed Chinese stocks dropped again on regulatory fears from China, which may ultimately see the foreign listings pulled off US exchanges. Several technology titans reported blowout quarterly earnings, including Apple and Alphabet, after the New York closing bell.

China’s recent regulatory actions, which appear intended to step up enforcement of antitrust measures, have put tremendous pressure on Chinese equities. The crackdown is part of a broader effort to regulate financial markets within the economic powerhouse. Earlier this year, Beijing signaled its displeasure with high-flying commodity prices and has since released state reserves to cool prices. That includes supplying domestic markets with oil reserves, which will likely translate into lower Chinese oil imports.

Despite haven flows into the Yen, the US Dollar—which also holds its own anti-risk appeal—saw a broad decline overnight. This follows a rollback in Fed rate hike bets leading up to tomorrow’s FOMC decision, evidenced by fed funds futures via the CME Group’s FedWatch tooll. The probability for a 25 basis point hike for the June 2022 meeting dropped from 19.1% to 14.0% over the last 24 hours. Traders will carefully parse the central bank’s statement and Fed Chair Powell’s commentary afterwards, which may result in outsized volatility, should either throw any surprises. 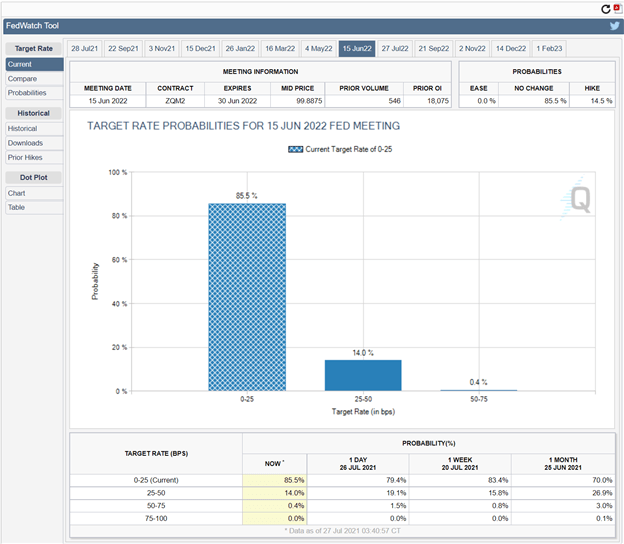 Speaking of monetary policy bets, the Reserve Bank of Australia’s (RBA) outlook will receive a key data point in today’s session. Australia’s second-quarter inflation rate is scheduled to cross the wires at 01:30 GMT. The consensus estimate stands at 3.8% on a year-over-year basis and 0.7% from Q1. A hotter-than-expected print may rekindle some RBA rate hike bets. The current wave of Covid has seen lockdowns from New South Wales to South Australia, which has put a dark cloud over the economic outlook.

The Japanese Yen saw a strong overnight moved against the Greenback, with USD/JPY falling to its rising 100-day Simple Moving Average overnight. The currency pair’s drop eased slightly, rising back above the 23.6% Fibonacci retracement level. Breaching below the 100-day SMA will be key to the Yen’s advance. Alternatively, a move higher will point prices toward a rising trendline that sent prices lower last week. 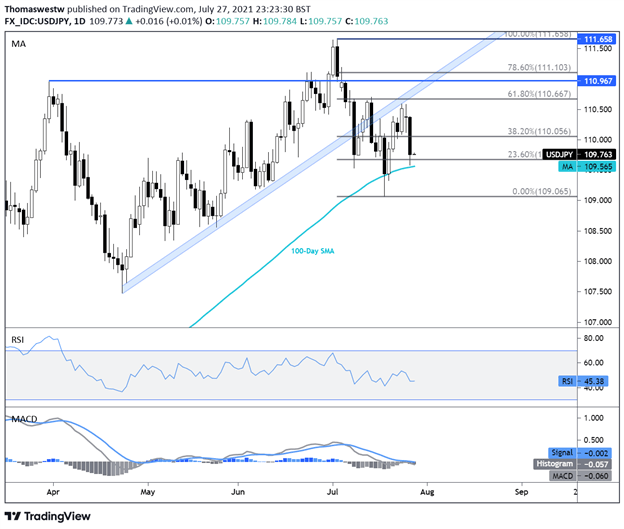 USD/CAD spiked to start the week and is already putting in a pullback to support at the 1.2800 handle.

The Hang Seng Index tumbled under the weight of an expanding Evergrande credit crisis amid growing fallout fears. Will r...