The Dow Jones Industrial Average (DJIA) sank over 1% on Thursday as Federal Reserve Chair Jerome Powell failed to calm fears over bond market volatility in a speech at the Wall Street Journal Jobs Summit, causing Treasury yields to climb. The Fed Chair reassured markets that an accommodative path will be kept until significant job growth and inflation are seen. However, some expected Mr. Powell to confront the volatility seen in bonds more directly, however, the central bank chief stopped short of those expectations.

The 10-year Treasury rate rose above the 1.500% mark along with the shorter end of the yield curve, with the 5-year yield climbing nearly 8%. Lofty valuations in technology stocks led the Nasdaq Composite 2.11% lower, stopping just shy of making a 10% correction from recent highs. Elsewhere, the Russell 2000 lost 2.76% and the S&P 500 closed 1.34% lower.

The US Dollar received a bout of safe-haven bids amid the market turmoil causing risk-sensitive currencies like the Australian Dollar to selloff against the Greenback. President Joe Biden’s stimulus plan progressed through Congress. The revised stimulus plan may clear Congress by late next week. This version remains at $1.9 trillion but excludes a $15 minimum wage, a major resistance point from Republicans and some moderate Democrats. 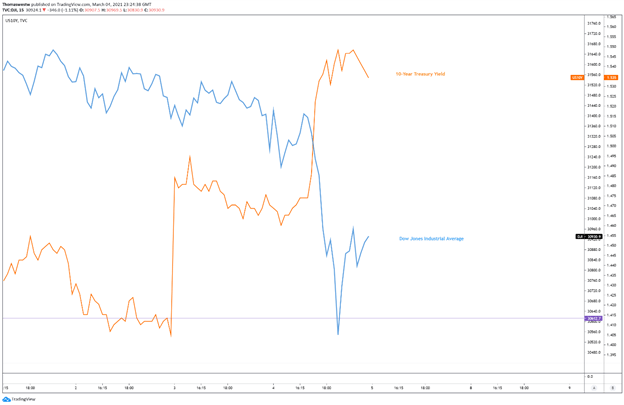 Rising government bond yields are weighing on Asian equities to mirror their US counterparts as reflation hopes drive yields lower. Friday’s economic event calendar is void of any notable events which leaves sentiment at the charge for price action. Thursday saw Australia report balance of trade data for January, with exports seeing a strong rise over the prior month.

The Australian Dollar is breaking below a key trendline that has supported prices since 2020 against the US Dollar. Moreover, the pair broke below its 50-day Simple Moving Average overnight and looks set to drop further, with the MACD oscillator driving lower towards its center line. The 78.6% Fibonacci retracement level may provide support to the downside. 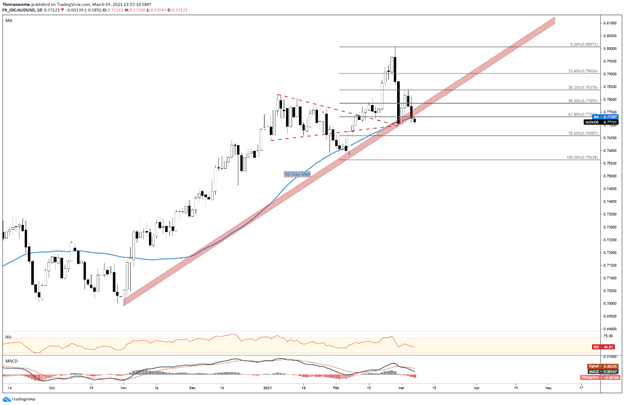