1 DAY UNTIL THE US PRESIDENTIAL ELECTION

In 24 hours, it will officially be election day. Polls continue to show Democratic nominee Joe Biden in the lead ahead of incumbent President Donald Trump. Having said that, the latest polls are indicating that the former Vice President is only ahead by roughly 6.8 points, slightly less than the typical 7-point average he’s maintained for several months. 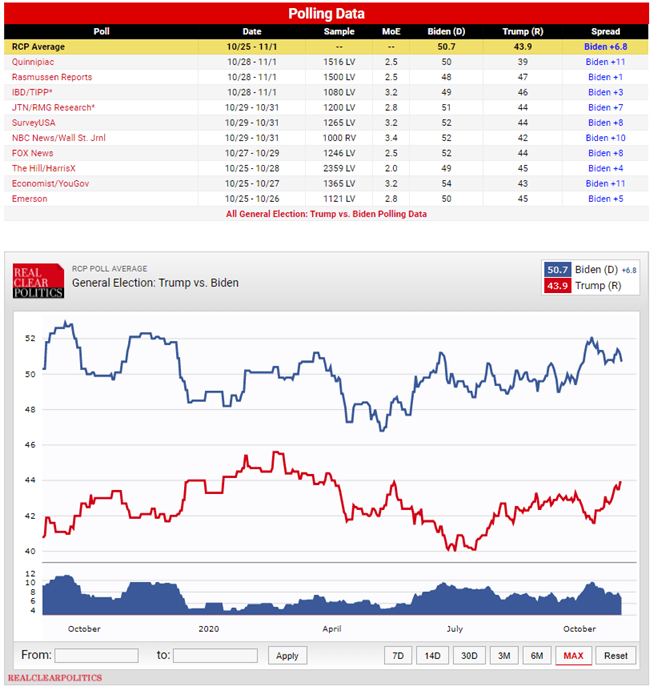 According to Politico forecasts, states like Nevada, Minnesota, Wisconsin, Michigan, New Hampshire and Pennsylvania are leaning more towards Biden. Others are up in the air, but Texas – a Republican stronghold with growing shades of purple now – remains heavily leaning in favor of Trump. The swing states will likely be the highlight of the election, and uncertainty there could push the haven-linked USD higher and Brent lower.

Crude oil prices may be starting to form the beginning of a rebound just above oscillating resistance/support at 36.45. The next major obstacle to clear will likely again be the pre-OPEC plunge at 45.51 where Brent shied away from clearing throughout early August. With the election coming up, given the far-reaching magnitude of its implications, crude may spike and edge closer to key resistance. Why might crude oil rise?