The pro-risk Australian and New Zealand Dollars were some of the best-performing major currencies over the past 24 hours. During the Wall Street session, the S&P 500 and Dow Jones climbed 0.57% and 1.44% respectively. This is despite an interruption to the certification process of the presidential election on Capitol Hill. There, rioters stormed the building, forcing a lockdown as policymakers were evacuated.

While sentiment remained upbeat, the event did result in a cautious pullback for equities, trimming gains. Overall, market mood was likely inspired by the outcome of Georgia’s Senate runoffs yesterday. Both of the Democratic candidates, Raphael Warnock and Jon Ossoff, likely defeated Republican incumbents Kelly Loeffler and David Purdue respectively.

This has opened to door to a 50-50 split in the Senate where Vice President-elect Kamala Harris can act as a tie-breaking vote, giving the Democrats a slight edge in the upper chamber. More importantly for financial markets, prospects of larger-than-expected fiscal stimulus in the near-term likely inspired investors to bet on a continued pace in economic recovery. Rising longer-dated Treasury yields reflected this narrative.

The AUD/USD extended its push above June 2018 highs, targeting the 2016 peak at 0.7835. Taking out the latter exposes the 0.8066 – 0.8136 resistance zone established in 2017 and 2018. However, negative RSI divergence shows that upside momentum is fading which is a sign of caution. But, a bullish ‘Golden Cross’ via the 20-day and 50-day Simple Moving Averages (SMAs) is underpinning the case to the upside. 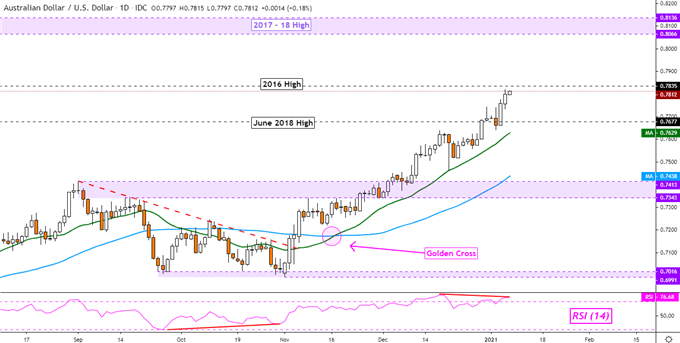 Futures tracking equities on Wall Street are pointing higher heading into Thursday’s Asia Pacific trading session, opening the door to an extension of the optimistic tone for markets. The regional economic calendar docket is fairly light, with the Aussie Dollar eyeing local trade balance data. But, the focus for it and markets as a whole will likely remain on risk trends.

Following the delay, US congressmen and congresswomen are expected to return to Capitol Hill to certify the election results later tonight. The haven-linked US Dollar may remain under pressure in the short term, offering a boost to commodities such as crude oil and precious metals like gold. However, rising Treasury yields may sap some of the potential from XAU/USD.

S&P 500 futures are trying to push above the 38.2% Fibonacci extension at 3737 on the daily chart below. A daily close above the upper shadows established earlier in the week exposes the midpoint of the extension at 3904. Negative RSI divergence does show that momentum is fading however. A turn lower may place the focus on the 50-day SMA which could maintain the focus to the upside. 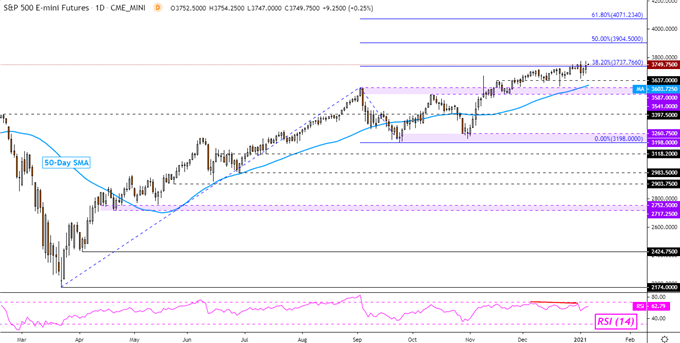