Currency markets idled in Asia-Pacific trade. Sluggish action in the G10 FX majors reflected a tinge of risk aversion, with the sentiment-sensitive Australian Dollar tracking lower while its anti-risk US counterpart edged up. Regional share prices shed close to 0.3 percent on average.

China is leading the way lower. The broad-based onshore CSI 300 index and Hong Kong’s Hang Seng Index (HSI) are down over 1 percent. Tech shares and healthcare names are suffering outsized losses but weakness is widespread, with the consumer discretionary sector alone in positive territory.

Futures tracking major European and US equity benchmarks are pointing convincingly higher however, suggesting that the risk-off tone may be regionally contained for now. The release of July’s flash PMI surveys dominates the economic calendar. Australia’s version of the report painted a dire picture.

Baseline forecasts put Eurozone economic activity growth at its fastest in 15 years for a second month. The pace of acceleration will have notably dropped for the first time in five months however. The US is projected to show similar results. UK performance is seen slowing for a second month despite historically elevated levels.

In essence, the markets expect to see the speed at which the global economy is recovering to plateau. Realized results may be less rosy if recent trends bear out. Data from Citigroup suggests that global economic news-flow has deteriorated relative to expectations over the past month.

Downbeat reports that amount to a meaningful loss of momentum may translate into a defensive mood. The proximity of the weekly close may further encourage a degree of de-risking. That could see the anti-risk US Dollar and Japanese Yen extend upward while commodity-bloc currencies trade heavy alongside shares.

The Australian Dollar may be preparing to resume the near-term downtrend against the Greenback having pulled up to retest support-turned-resistance clustered around the 0.74 figure. The most immediate layer of significant support is in the 0.7222-44 zone.

Neutralizing near-term selling pressure seems to demand a daily close above 0.7435-40, thus violating the most recent series of lower highs and lows. Challenging the 0.76 figure once more time may follow if such an upward breakout can be secured.

Overall positioning argues for a bearish bias however. Prices completed a large Head and Shoulders (H&S) topping pattern and demonstrated clear follow-through on the push through its neckline, speaking to sellers’ conviction. The H&S formation implies a downside objective in the 0.7120-30 region. 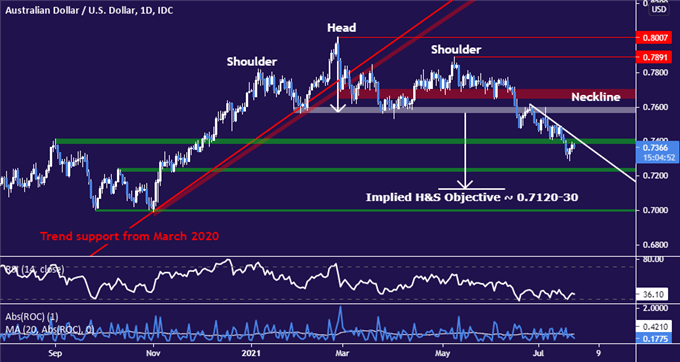