June’s US CPI report stands out as the first bit of heavy-duty event risk this week, and may have the potential to revive volatility after a relatively slow start Monday. It is expected to show that the core inflation rate – which excludes volatile items like food and energy – rose to a 29-year high of 4 percent on-year.

US price growth measures has increasingly outperformed relative to baseline forecasts, according to data from Citigroup. Indeed, realized results are outstripping expectations by the largest margin on record since at least 1998. That implies analysts’ models understand reflation, setting the stage for another upside surprise.

Such an outcome is likely to stoke speculation about acceleration in the timeline for the start of Fed stimulus withdrawal – a so-called “tapering” of QE asset purchases – and subsequent interest rate hikes. That may drive the US Dollar higher against most of its G10 FX peers. The Yen might be a notable exception.

The Euro managed a spirited bounce against the US Dollar late last week but the dominant near-term downtrend carved out from the mid-May top remains intact. Bearish resumption that manages a daily close under swing-low support at 1.1781 looks like to expose the March low at 1.1704 next.

Immediate resistance is in the 1.1836-86 congestion area. Establishing a foothold back above that may pave the way for another challenge of the 1.1952-90 inflection region. If this too is overcome, neutralization of immediate selling pressure might set the stage for revisiting the 1.21 figure. 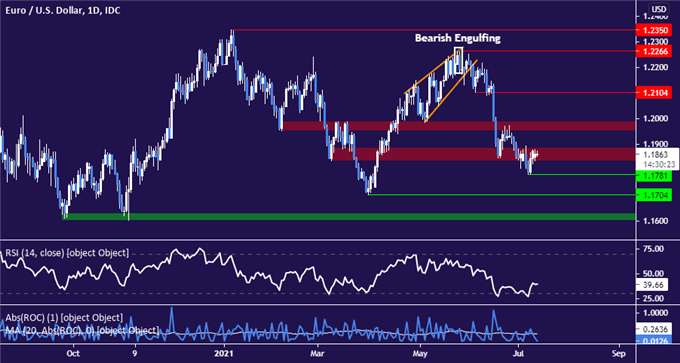