The Asia-Pacific session is set to follow Wall Street lower as a bout of risk aversion sweeps through global markets. US equity market losses were deep and broad, led by a 2.09% decline in the Dow Jones Industrial Average (DJIA). Risk aversion spurred a move into Treasuries, pushing the benchmark 10-year yield to its lowest level since February. Fears over an economic slowdown, driven by a resurgence in Covid cases, have investors pumping the brakes on growth-linked assets. Risk-off flows benefited haven-linked currencies, with the biggest benefactor being the Japanese Yen.

Crude and Brent oil prices dropped sharply, reflecting the same concerns driving equity markets lower, but also an OPEC+ deal that will see added supply hit the market in August. The oil cartel agreed to raise supply by 400,000 barrels a day starting next month. Crude oil saw its worst drop in months as the additional supply compounded on demand-side woes. The global reflation narrative appears to be in serious jeopardy, in some ways complimenting the transitory inflation signals that major central banks have been talking about..

Speaking of central banks, the Reserve Bank of Australia (RBA) will release its July meeting minutes today. The RBA slightly reduced its asset purchases while keeping its cash rate unchanged at 0.10%. The Australian economy has performed well, but the new round of lockdowns across major metro areas has the potential to upend economic growth. The state of Victoria saw 13 new locally sourced cases on Monday, extending the lockdown deadline. Sydney in New South Wales (NSW) also saw lockdown protocols increase over the weekend. The Australian 10-year bond yield fell to its lowest since early February, sinking more than 6% overnight. That compares to a 0.55% overnight drop versus the Greenback, a currency that also attracts haven flows.

Today will also see Japanese inflation data cross the wires. A small pickup in prices is expected for June, with the consensus forecast looking for a 0.2% rise on a y/y basis, up from 0.1% in May. However, the Yen is likely to remain in a strong position regardless of Tuesday’s data. This is because the currency may focus on its haven-oriented characteristic while the CPI data does little to alter the Bank of Japan’s monetary policy trajectory. That said, comparing the Yen against the growth-oriented Australian Dollar opens the door to relatively more aggressive volatility, with AUD/JPY dropping well over 1% as global markets tanked on Monday.

The Japanese Yen fell over 0.5% against the US Dollar overnight, bringing the currency pair briefly below its 100-day Simple Moving Average (SMA) before recovering a portion of losses. The 61.8% Fibonacci retracement level from the April to July move saw prices pivot higher from a deeper overnight pullback. The MACD and RSI oscillators are both tracking lower, and MACD crossed below its center line, a bearish signal. 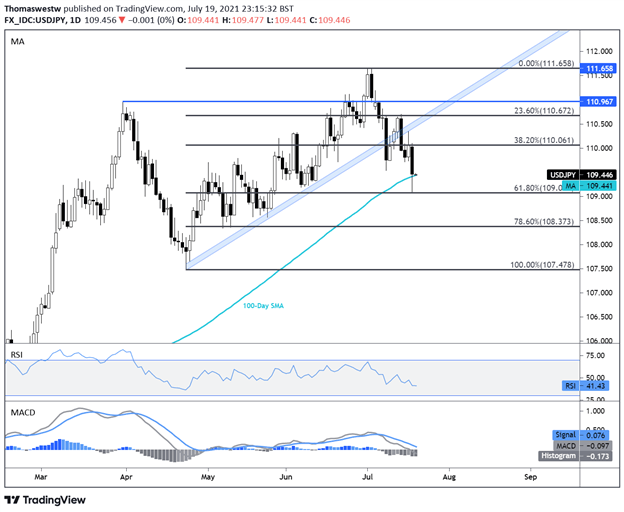