The Euro has idled even as most of its major counterparts saw violent price moves against the US Dollar. Indeed, even the Swiss Franc – which tends to track closely with the single currency’s moves against the Greenback – has been three times more volatile this week.

This probably reflects traders’ reluctance to commit one way or another ahead of today’s monetary policy announcement from the ECB. The central bank will begin to unveil how the comprehensive policy review that it has just concluded will be reflected in its current posture.

It seems to be a given that the underlying message will be decidedly dovish. The ECB has already increased its inflation target to 2 percent having previously aimed just below that level, and promised to be “forceful or persistent” in reaching it.

Central bank President Christine Lagarde fanned the flames of speculation, saying that “interesting variations and changes” are to be expected. She told Bloomberg in an interview that “given the persistence that we need to demonstrate to deliver on our commitment, forward guidance will certainly be revisited.”

WHAT WILL THE ECB ACTUALLY DO?

A number of avenues for change present themselves. The ECB may announce that it will tolerate an inflationary rise that is expected to put price growth north of the target for some time. It might also commit not to hike interest rates at least through 2023, scattering the markets’ bet on a small rise that year.

The fate of the Asset Purchase Programme (APP) – the ECB’s long-running version of QE – and the supplemental Pandemic Emergency Purchase Programme (PEPP) are also on the table. Official changes are due in September, but their direction may be previewed this time around.

One way forward may be to commit to spending all of PEPP – which the central bank has shied away from previously – and making it permanent by rolling the inherently temporary effort into the APP. The size of purchases in the latter scheme may then be increased.

The key question at hand is whether whatever the ECB will opt for at this meeting will be “dovish enough” relative to market expectations. That greater easing is on the way is surely not surprising. To cement the credibility of its new regime, Lagarde and company will need to bring the fireworks.

The appearance of positive RSI divergence and a Falling Wedge chart formation hint that downside momentum is ebbing, which may set the stage for EUR/USD to rebound. However, this may yet prove to be no more than a slowdown in the downward push relative to June’s explosive selloff.

For a start, making the case for a reversal probably demands a daily close above the Wedge top. From there, prices face a dense bloc of back-to-back resistance running up to the 1.20 figure. Establishing a foothold above that is probably a pre-requisite for bullish follow-through.

Alternatively, a push through minor swing-low support at 1.1772 exposes the 1.17 handle. Securing a breach below this barrier – again, on a closing basis – will probably put prices on a path to challenge the pivotal floor in the 1.1603-30 area. 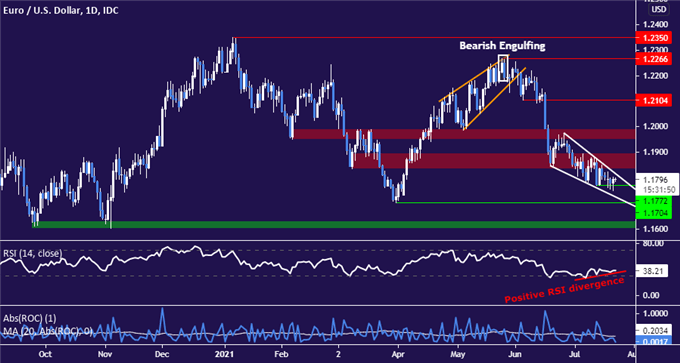 Just getting started? See our beginners’ guide for FX traders

What is your trading personality? Take our quiz to find out

Join a free webinar and have your trading questions answered