Cryptocurrencies are continuing to show hints of recovery after a really rough two-week-stretch. That recovery does appear to be a little brighter in Ethereum at the moment, which highlights a bigger theme that’s become more prevalent in 2021 as Ether is appearing to steal some of the crypto spotlight from the titan of Bitcoin.

At this point, there could be a bullish justification for Ethereum given the hold at higher-low support around the 50% Fibonacci retracement of the recent major move, spanning from the Jan 11 low up to the May high.

To learn more about Fibonacci, check out DailyFX Education

Bitcoin, on the other hand, doesn’t look as healthy as there’s been a continued build of resistance around the $40k handle that’s capped this week’s recovery, at least so far. On the below chart, I’ve added a Fibonacci retracement around a similar major move, spanning from the January 4th low up to the April high.

A big driver behind the crypto rally was wider acceptance of cryptocurrency, led in part by the announcement from Tesla that they were a) going to put Bitcoin on their balance sheet and then b) accept the cryptocurrency as payment.

Soon after they announced that they’d stop accepting Bitcoin as payment due to the energy inefficiency by Bitcoin mining and this spurred a heated debate on the topic. But Musk stood his ground (on Twitter) and made a series of arguments behind his thesis. He also shared that he’s talked with North American Bitcoin Developers to discuss a more efficient energy strategy and that’s seemed to help with the recent recovery, to some degree.

But, a bigger debate exists around the long-term future of cryptocurrencies. Ethereum may hold some attractiveness from a usability standpoint when compared to Bitcoin. While Bitcoin is a proof-of-work currency that will require electricity to conduct transactions, Ethereum has already started to shift focus to Ethereum 2.0 as a more efficient medium. Ethereum also brings some additional value, such as with NFTs which highlights the fact that Ether is more than just a coin, its practically a full operating system. So, if we are looking at a future in which crypto will be a big part, Ethereum may be a bit more attractive than Bitcoin, and this can be seen in the 2021 trend so far. The chart below looks at Ethereum v/s Bitcoin, with higher prices showing bullish preference towards Ether v/s Bitcoin.

Why Might This Matter – and What is the Primary Risk?

The reason why this may turn out to be more than just a fad or a mania is because of central bank policy. At this point, the Fed still shows the appearance of relative calm in the face of rising inflation. The bank has continually said that they feel the inflationary indications that we’ve seen so far are transitory in nature, and will eventually take care of themselves.

That’s allowed the Fed to keep monetary policy really loose, but a combination of rising inflation with low rates means that real rates are going negative – which means a loss of purchasing power. And this was something noted by Elon Musk earlier this year when he was making his bull case behind crypto.

The biggest risk here is something we’ve seen pop up recently out of China, as governmental regulation could create a wave of change in the space, and this is likely the biggest item to contend with for crypto bulls.

The chart below shows the Federal Reserve’s balance sheet through last year, and notice the parabolic-move that’s happened in this data as the bank threw the kitchen sink at supporting the economy through the covid pandemic. 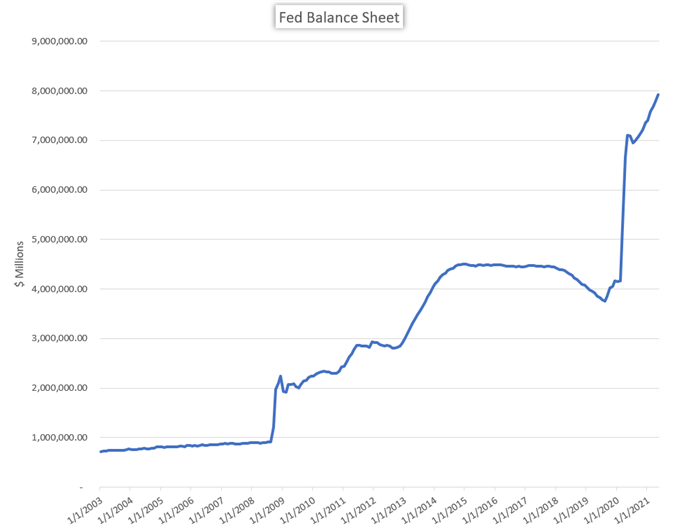