The Australian Dollar is coming off steep losses last week when the Federal Reserve made a hawkish shift in its policy outlook. The prospect of the highly influential central bank pulling back support sooner than previously expected sent the US Dollar soaring, with the DXY index gaining 2% on the week. Volatility may moderate on Monday as traders reassess the markets’ pulse.

Implications from the Fed decision and its impact on the Greenback spilled over into global markets. Risk-sensitive currencies weakened, with the Aussie Dollar facing additional pressure from a drop in commodity prices. Copper sank nearly 10% last week in its worst performance since March of last year, while iron ore dropped over 5%.

Those headwinds could persist but a better-than-expected retail sales figure out of Australia may slow the bleeding. The Australian Bureau of Statistics (ABS) is set to release preliminary figures for May at 01:30 GMT. While the country has made significant progress against Covid, a late-month ‘circuit breaker’ lockdown in the state of Victoria may have negatively impacted retail sales growth.

Elsewhere, Bitcoin continues to weaken as the digital currency’s decline following a brief test above the closely-watched 40,000 level moves into its seventh consecutive day. The largest cryptocurrency has been hit across several fronts in recent weeks as regulatory scrutiny increases. A bearish Death Cross technical signal was generated recently from the 50-day Simple Moving Average (SMA) crossing below the 200-day SMA.

Outside of Australia, China’s loan prime rates (LPR) across the 1- and 5-year tenors will cross the wires. The benchmark 1-year LPR is likely to stay unchanged at 3.85% for the June fixing following the People’s Bank of China (PBOC) holding steady on the one-year medium-term lending facility (MLF) rate earlier this month. The economic calendar for the Asia-Pacific region is rather light, although the UK Bank of England (BoE) rate decision may affect broader sentiment if the central bank sends any unexpected signals.

The Australian Dollar broke below its 200-day SMA last week against the US Dollar as the currency pair sank 2.92% in its worst performance of the year. The violent move lower saw AUD/USD drop to a level not traded at since December. A move lower will see the September swing high at 0.7413 shift into focus for a potential support level. Alternatively, the 200-day SMA and former neckline of a Head and Shoulders pattern could serve as resistance. 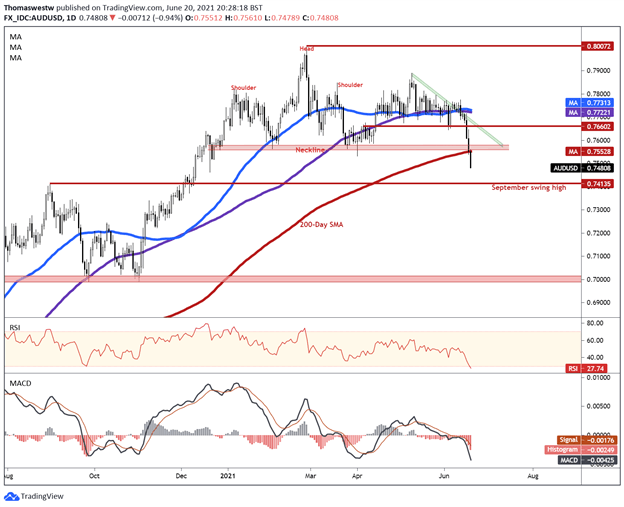