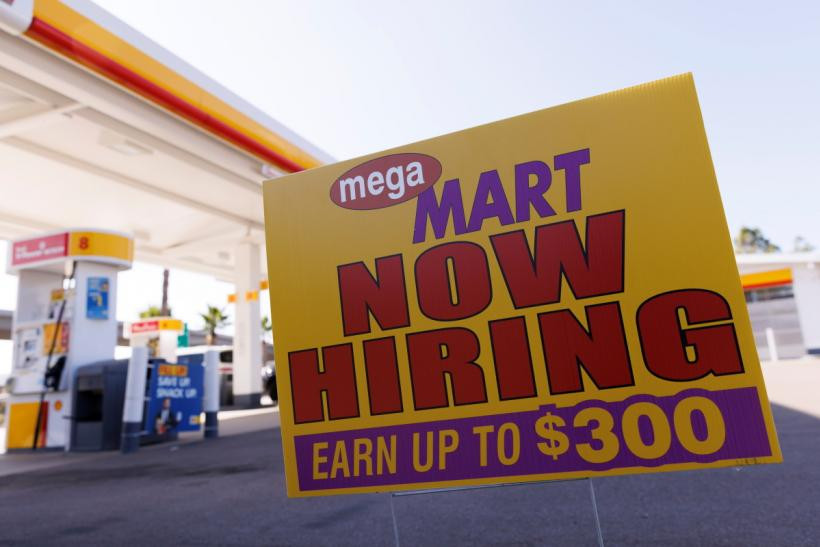 The ADP National Employment Report on Wednesday showed a broad slowdown in hiring, with job gains in the leisure and hospitality industry also the smallest since late 2020. Companies with less than 50 employees saw a decline in payrolls.

Private payrolls rose by 247,000 jobs last month, the smallest gain since April 2020. Data for March was revised higher to show 479,000 jobs added instead of the 455,000 initially reported. Economists polled by Reuters had forecast private payrolls would increase by 395,000 jobs.

The ADP report is jointly developed with Moody's Analytics and was published ahead of the release on Friday of the Labor Department's more comprehensive and closely watched employment report for April. It has, however, a poor record predicting the private payrolls count in the department's Bureau of Labor Statistics employment report because of methodology differences.

"Job growth will slow over the course of 2022, not because of a lack of demand for labor, but a lack of supply," said Gus Faucher, chief economist at PNC Financial in Pittsburgh, Pennsylvania. "The tight labor market is pushing up wages, adding to inflationary pressures in the U.S. economy."

The Federal Reserve is expected to hike interest rates by half of a percentage point later on Wednesday, and likely to start trimming its asset holdings soon. The U.S. central bank raised its policy interest rate by 25 basis points in March.

Government data on Tuesday showed there were a record 11.5 million job openings on the last day of March, which pushed up the jobs-workers gap to a record 3.4% of the labor force from 3.1% in February.

According to a Reuters survey of economists, private payrolls likely increased by 385,000 jobs in April after rising by 426,000 in March. With further gains in government employment expected, that would likely lead to an increase of 394,000 in nonfarm payrolls. The economy created 431,000 jobs in March.

A separate report from the Commerce Department on Wednesday showed the trade deficit surged to a record high in March, confirming that trade weighed on the economy in the first quarter and could remain a drag as businesses replenish inventories with imported goods.

The trade deficit accelerated 22.3% to $109.8 billion in March amid a record increase in imports. Economists had forecast a $107 billion deficit.

The government reported last week that a record trade deficit sliced 3.20 percentage points from gross domestic product in the first quarter, resulting in GDP contracting at a 1.4% annualized rate after growing at a robust 6.9% pace in the fourth quarter.

Trade has subtracted from GDP for seven straight quarters. Imports of goods and services jumped 10.3% to $351.5 billion, outpacing a 5.6% rise in exports to $241.7 billion.

Imports of goods were boosted by industrial supplies and materials, which increased $11.3 billion to $76.4 billion, the highest since July 2008. Petroleum imports in March were the highest since December 2014. Consumer goods imports rose $10.0 billion to a record $83.1 billion, lifted by apparel, household goods, footwear, toys, games and sporting goods.

Capital goods increased $5.2 billion, while imports of motor vehicles and parts rose $3.2 billion. Imports of services increased $0.9 billion to $52.7 billion, reflecting rises in transport and travel, but charges for the use of intellectual property decreased $1.2 billion.

"What the huge demand for imported goods does show is that America may have more of a demand problem than a supply problem," said Christopher Rupkey, chief economist at FWDBONDS in New York. "As long as import demand keeps setting records, it shows the Fed has to keep pushing interest rates up and up because American consumers and businesses are not done buying yet and strong demand keeps the inflation fires burning."

Exports of goods were supported by a $7.4 billion increase in industrial supplies and materials, which reflected rises in shipments of crude oil and natural gas liquids. Motor vehicle and parts exports increased $1.0 billion.

Exports of services increased $1.2 billion to $71.1 billion in March. They were lifted by gains in transport, travel, financial services and other business services.