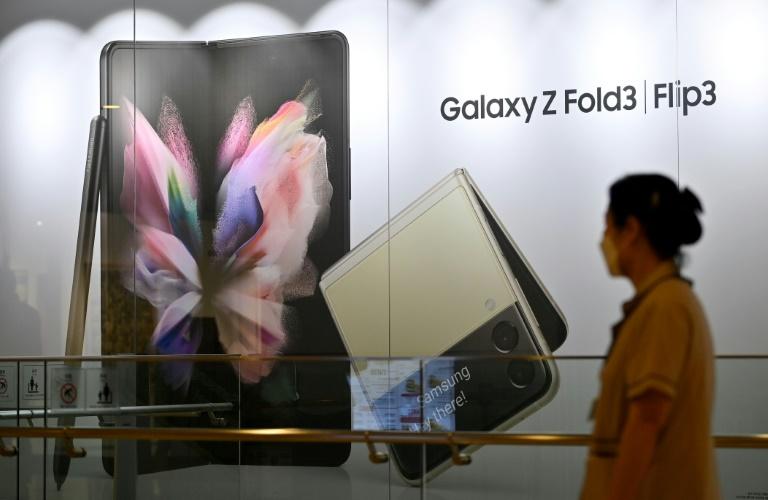 The firm was boosted by record sales in the quarter, estimated at 76 trillion won, up 23.5 percent on-year, according to the statement, which added that the forecast reflected a one-time bonus payment to employees.

A spokeswoman told AFP annual sales in 2021 were also expected to be the highest ever.

The operating profit estimate was below analysts' estimate of 15.2 trillion won, according to Bloomberg News.

"The most significant source of income for Samsung lies in the memory chip business."

Samsung Electronics did not provide details Friday on the performance of its various divisions. The firm is expected to release its full results on January 27.

While the coronavirus pandemic has wreaked havoc on the world economy, it has helped many tech companies boom.

Pandemic-driven working from home has boosted demand for devices powered by Samsung's chips, as well as home appliances such as televisions and washing machines.

Analysts had also expected the firm to benefit from the traditionally lucrative holiday season.

The world's biggest memory chip maker, Samsung Electronics has aggressively stepped up investment in its semiconductor business as the world battles chip shortages that have hit everything from cars and home appliances to smartphones and gaming consoles.

In November, it announced a new microchip factory in Texas, a $17 billion investment. The plant is expected to be operational by the end of 2024.

It joined rivals TSMC from Taiwan and US firm Intel in expanding chip manufacturing capacity in the United States, which sees the sector as an area of strategic competition with China.

The firm is also investing in the development of advanced technologies such as artificial intelligence, robotics and 5G/6G communications.

Samsung Electronics is the flagship subsidiary of the giant Samsung group, by far the largest of the family-controlled empires known as chaebols that dominate business in South Korea.

The conglomerate's overall turnover is equivalent to around one-fifth of South Korea's gross domestic product.

Samsung Electronics shares were up 1.4 percent during morning trade in Seoul.

Toyota Overtakes GM To Lead US Auto Sales For 2021

The Trump Organization is under investigation by the Manhattan district attorney for possible financial crimes and insur...

While Apple's image has arguably emerged less bruised than some Big Tech names, it is hardly free of controversy.

The company is expected to send letters to owners February 18 and will reimburse those who already paid to fix the issue...

The factory makes iPhones for the Indian market and for export, as well as other gadgets.

Samsung In Talks To Buy Biogen For $42 Bn: Report

The company, based in Cambridge, Massachusetts, had revenues of $13.4 billion last year