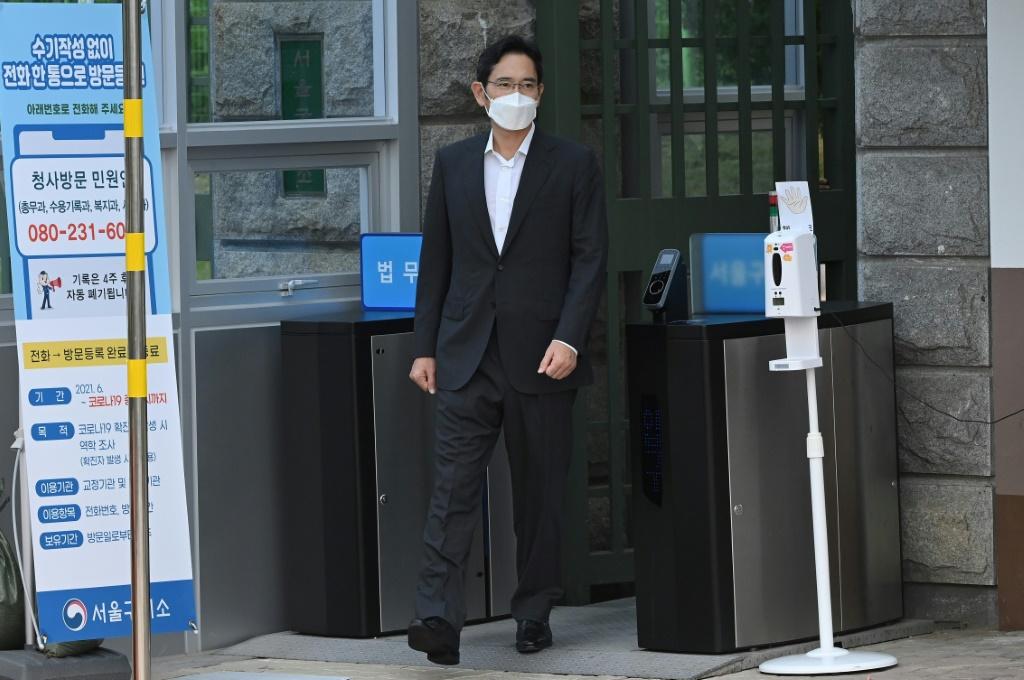 Lee Jae-yong -- the 202nd richest person in the world according to Forbes, with a net worth of $11.4 billion -- was serving a two-and-a-half year prison sentence for bribery, embezzlement and other offences in connection with the corruption scandal that brought down ex-South Korean president Park Geun-hye.

But calls for his early release from both politicians and business leaders grew in recent months over what they claimed was a possible leadership vacuum at the South's biggest conglomerate.

The justice ministry announced Monday he had been paroled -- among around 800 early releases -- citing concerns over the coronavirus pandemic's impact on the economy.

Lee, 53, bowed to reporters waiting outside a detention centre south of Seoul and told them: "I have caused too much concern to the people. I'm really sorry."

Wearing a black suit, he added: "I'm listening carefully to your worries, criticisms, concerns, and high expectations about me," before he was driven away in a black limousine.

Lee was first jailed for five years in 2017, after Park's ouster, then walked free the following year when an appeals court dismissed most of his bribery convictions and gave him a suspended sentence.

But the Supreme Court later ordered Lee to face a retrial, which convicted and jailed him again.

Nonetheless, Lee remains on trial over alleged stock manipulation that effectively eased his path to take control of the family conglomerate -- the same purpose for which he was convicted of bribing Park.

There is a long history of top South Korea tycoons chaebol figures being charged with bribery, embezzlement, tax evasion, or other offences.

But many of those convicted have subsequently had their sentences cut or suspended on appeal, with some -- including late Samsung chairman Lee Kun-hee, who was convicted twice -- receiving presidential pardons in recognition of their "contribution to the national economy".

"This is undeniably preferential treatment, especially given that a separate trial is still going on," Song Won-keun, an economics professor at Gyeongsang National University, told AFP.

According to justice ministry data, only 0.3 percent of all convicts who were released on parole from 2011 to 2020 served less than 70 percent of their jail terms.

But a rule change came into effect this month cutting the proportion of their sentences prisoners must serve before being eligible for parole to 60 percent -- a mark Lee passed a few weeks ago.

The giant Samsung group is by far the largest of the family-controlled empires known as chaebols that dominate business in South Korea, the world's 12th largest economy.

Chaebol families often have only a small ownership stake in their empires, but maintain control through complex webs of cross-shareholdings between units.

Lee promised last year to end the line of family succession at the firm, saying he would not pass down his role to his children as he bowed in apology for multiple controversies.

His imprisonment has been no barrier to the firm's performance -- it announced a surge of more than 70 percent in second-quarter profits last month, with coronavirus-driven working from home boosting demand for devices using its memory chips.

Regardless, leaders of the country's top four conglomerates -- SK Group, Hyundai Motor Group, LG Group and Samsung -- in June met with President Moon Jae-in to press him to pardon Lee.

Polls also showed an increasing number of South Koreans in favour of granting him parole, with backing from more than 66 percent of respondents in a recent Realmeter survey.

But Vladimir Tikhonov, a professor of Korean Studies at the University of Oslo, took a different view.

"Releasing him does not follow routine law-enforcement practice and suggests that his wealth could have been a factor," he told AFP.

"This is a departure from the idea that everyone is equal before the law."