A consortium led by Bharti Enterprises has won the bid for OneWeb, a bankrupt firm that makes satellites in the UK and the US. Bharti had bid jointly with the UK government for the auction that was seen as “controversial”. They would invest around $500 million each to acquire OneWeb, which had declared bankruptcy earlier this year.

The move may help the consortium to compete with Elon Musk’s Starlink in beaming high-speed internet from space. For telecom major Bharti, it’s also a step towards easy internet connectivity in the hinterland.

For the Sunil Mittal-led group, the deal is perhaps special for other reasons too. It was put together by a team at Bharti Global, the London-headquartered overseas arm of the telecom major, with Shravin Mittal — one of Chairman Sunil Mittal’s twin sons — leading the initiative. Shravin, 33, is the founder of Unbound that aims to build and back technology firms. He’s also a director at Bharti Global, the group’s family office.

Herbert Smith Freehills was the legal counsel while Standard Chartered Bank acted as the financial advisor to Bharti Global.

“Following a competitive process, the consortium’s winning bid represents a strong offer that will enable OneWeb to successfully emerge from the Chapter 11 (insolvency) process with a robust foundation,” OneWeb, which had launched 74 satellites before the bankruptcy, said.

OneWeb will now complete the construction of a global satellite constellation that will provide enhanced broadband and other services to mobile and fixed terminals in countries around the world, Bharti said. The new tech becomes even more relevant in the pandemic era, as it offers high-internet speed and low latency, a perfect combination of quality service to connect the rural areas across the world with the internet. 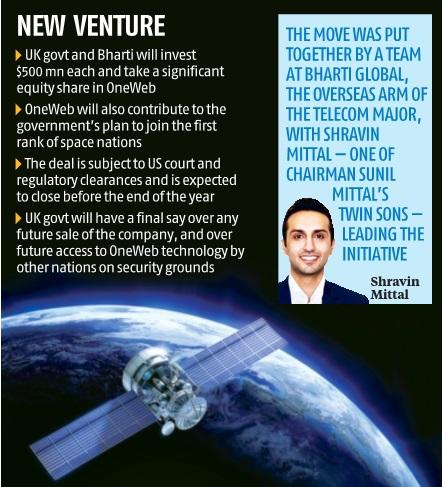 “I am delighted that Bharti will be leading the effort to deliver the promise of universal broadband connectivity through OneWeb, with active support and participation of the British government,” Sunil Mittal said in a statement. In addition to the strategic opportunities across a wide range of other applications and working with a broad range of international partners, this business has substantial commercial use cases across the telecoms, enterprise, aviation, and maritime sectors, he pointed out.

“As one of the largest telecoms operators in India and Africa, I know what a powerful social and economic enabler this can be. We will work with partners around the world to deliver this technology to those who need it the most,” Mittal said, while commending the Bharti Global team led by Shravin for putting together the winning bid within such a short timeframe.

UK Business Secretary Alok Sharma confirmed the government would invest $500 million and take a significant equity share in OneWeb. “OneWeb will also contribute to the UK government’s plan to join the first rank of space nations, along with our commitment to making the UK a world leader in science, research and development,” Sharma said.

Bharti will provide the company commercial and operational leadership, and bring OneWeb a revenue base to contribute towards its future success. The deal is subject to US court approvals and regulatory clearances, and is expected to close before end of the year. OneWeb was formed in 2012 with a mission to offer high speed, low latency wireless broadband access to billions of people across the globe, especially in rural areas through a constellation of satellites in low earth orbit. Bharti was one of the founding members of OneWeb and had a strategic stake in the company.

Pair is back higher on the day As London/European traders had for the exits, the EURUSD is trading to new NY/London se...

Down day for the major indices The provisional closes are showing: In the European debt market, the benchmark 10 year yi...

Buyers and sellers try breaks but fails The EURJPY moved above the high from last week yesterday at 125.196. That break...

USDCHF Moves Toward MA Targets (and Other Resistance Targets).