In a major relief to Bharat Sanchar Nigam Ltd (BSNL), the government has received presidential approval for increasing the company’s borrowing limit from Rs 31,213 crore to Rs 39,713 crore, and that includes raising Rs 8,500 crore through a sovereign guarantee bond in FY21, but with stiff riders.

The approval is the key to BSNL’s turnaround plan, which includes setting up a 4G network so that it can compete with private competitors.

Currently it has only a 10.32 per cent share of the Indian mobile market as of February this year.

However, it comes with conditions. BSNL will have to take steps to improve its revenues from operations for FY 21 as well as in the future so that it is able to meet expenditure, including capex, from its internal accruals and repay its loans in time.

Secondly, it has to certify to the Department of Telecommunications (DoT) that the loan it is taking is financially viable.

Thirdly, its loan outstanding should not go beyond a stipulated amount and it will keep its operating expenditure (opex) to a minimum, in keeping with its financial position.

Finally, it has to issue instructions to its field units for booking expenditure incurred on capex and opex. 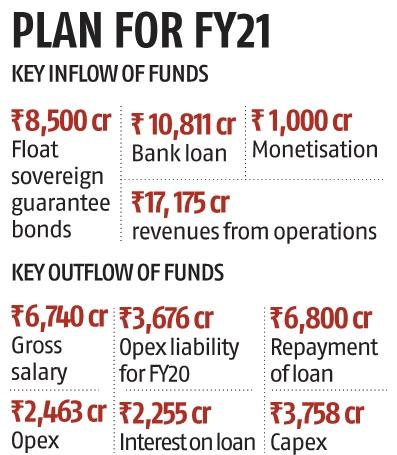 The state-owned company recently faced a setback when it was forced to cancel its tender for 4G equipment of around Rs 8,000 crore. This was because of opposition from home-grown telecom equipment makers, which said it discriminated against them and the tender was against the government’s local procurement policy.

The DoT has set up an eight-member committee under the chairmanship of the member (technology) to recommend technical specifications for the 4G tender of the company.

Even the NITI Aayog held a meeting on the tender with officials of the DoT, BSNL, and home-grown telecom companies like Tech Mahindra, Tulip Software, and C-DoT.

The think tank recommended BSNL go in for an indigenously designed, developed and manufactured (IDDM) solution for its 4G network.

However, BSNL Chairman P K Purwar made it clear that on the basis of responses of home-grown companies, it was apparent the products needed development.

And his company did not have the money for experimentation. So before finalising the tender’s capabilities have to be demonstrated.

The move, if pushed through in the revised tender, could be a dampener for global gear manufacturers from China like Huawei and ZTE and European giants Ericsson and Nokia.