The US Dollar continues to consolidate ahead of tomorrow’s CPI report.

Last week saw a bounce in the US Dollar from a key spot of support, and that was pushed-along by a series of comments from Fed-speakers, all of which seemed to take on a hawkish tone. Last Tuesday’s bar finished as a bullish engulfing candlestick after a test of support around the 105.00 handle, and the move continued through early-Wednesday trade, for an eventual show of resistance at the 106.82 level.

That same price held another advance later in the week and after a hold at higher-low support yesterday, prices have continued to pullback. This leaves the US Dollar, at least near-term, in a rather trend-less state. The prevailing trend was a strong bullish move and price has since held support at the 50% marker of that move, thereby keeping the door open for bullish trend continuation. The big question now is one of timing, and it seems that there’s two possible fundamental factors (and one technical) that can push this along: Either a) more hawkish Fed speak, similar to what we heard last week, with the bank pledging to more and more rate hikes as inflation still remains very elevated. Or b) inflation prints with another upside surprise tomorrow. This is what happened in July and that led to a fresh 19-year high in the USD. That high remains in-place today, unfettered as prices have continued to pullback, even through the FOMC rate hike at the end of last month.

The expectation for tomorrow is for headline CPI to pullback to 8.7% from last month’s 9.1% print. But, Core is expected to increase to 6.1% from last month’s 5.9%. The big question and something we’ll likely hear Fed members opine on, is whether a reduction to 8.7% would have any impact on a possible Fed pause, because inflation still remains extremely elevated from the 2% Average Inflation Target. 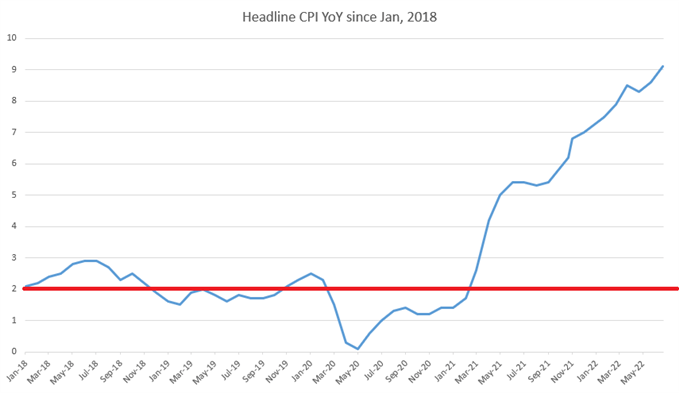 On the technical front – the major item that could compel USD strength is the same factor that’s likely been holding it back, and that’s EUR/USD’s inability to push a lasting breakdown through the parity figure. If something bad happens around Europe and EUR/USD sinks to .9800, we would likely be seeing some considerable USD-strength to go along with it.

Which brings up a fairly pertinent item at the moment, and that’s the utter lack of trend in EUR/USD over the past month. On July 7th, EUR/USD was finding support around 1.0146. That same price was in-play on Friday, and since the parity incursion – EUR/USD has been confined to a rectangle formation that’s been holding for 16 trading days now.

To be sure there’s motive on both sides here. Fundamentally speaking, there’s still pretty clear divergence between US and European policy. And from an economic health standpoint, I’d argue that there’s divergence there, as well, although that’s far more subjective. And that can contribute to a bearish fundamental bias.

And on a technical basis it’s not all roses either, as there’s been a back-breaking down-trend that’s shown minimal signs of recovery.

But – that parity figure.

If bears are skeptical of a prolonged run below the big figure, that can constraint selling efforts whilst so close to the level. After all, if looking to take price down to parity, possible upside is capped. And we’re in a range, so timing the down-trend shouldn’t be expected as an easy feat – meaning some adverse excursion should be expected. So, is the risk of that capped-upside scenario attractive enough to draw fresh bears into the mix?

Apparently not, as evidenced by the continued range.

With that said, there is some longer-term bearish attraction to a bullish break of the rectangle – which could then bring into play resistance at the trendline or perhaps even the 1.0340 prior swing low.

Keep in mind, there’s likely a plethora of stops above this rectangle and if those get triggered, that’s an influx of buy orders (to cover shorts) and that can further propel price. The bearish argument can hold some water all the way up to resistance around the 1.0600 handle, in my opinion.

Given the incredibly high allocation of the Euro in the DXY quote, a trend-less EUR/USD can often amount for a trend-less US Dollar.

The Greenback set its current 19-year-high on the heels of last month’s CPI report. Since then, it’s retraced as much as 50% of the prior bullish trend. Last week brought the bounce on Tuesday, helped along by those Fed comments, and as I looked at yesterday there was a short-term ascending triangle that was starting to build, but that’s become a bit noisier as support as been tested through.

On a slightly bigger-picture basis some key levels come into the picture. A breach of 106.82 opens the door for a test of the 23.6% Fibonacci retracement, which had previously set resistance ahead of the FOMC rate decision. On the support side, the 50% marker is still confluent with the prior swing-high and the 105.00 psychological level.

GBP/USD is back to a familiar area of support. The zone from 1.2000-1.2021 has held another inflection, and this has allowed for a build of another falling wedge formation, similar to last month. That bounce produced an extended wick on the four-hour chart, illustrating a pretty clear play of price action support.

Falling wedges are bullish reversal formations, and given the backdrop, there’s some potential here for USD-bears. If the US Dollar is going to pose a greater pullback around that CPI print tomorrow, topside strategies in GBP/USD can becomes attractive on the breach of wedge resistance. The 1.2292 figure has now come in as resistance twice, and that would remain a key point of emphasis for bullish reversal strategies should the wedge fill-in.

While there’s a lot of chop around USD-pairs of late, USD/CAD looks a little noisier to me on a short-term basis.

But, taking a step back and the techs are pretty clear. There’s a bear flag formation that’s built since the May 2021 lows. And for the past three months, buyers have continually been thwarted at or around the 1.3000 psychological level, which is confluent with the 38.2% retracement of the 2020-2021 sell-off.

Given the bullish channel that’s been going for more than a year at this point, near-term biases can remain as bullish. The bigger question is whether buyers can force a break through the 1.3000 zone. And, for bears, that becomes an area of interest for resistance potential to play-in.

I’ve written quite a bit about the Yen of late, largely due to the heavy focus on rate themes which has a relationship with the Yen given the carry trade.

Over the weekend, I talked about the fundamental reason behind all of this focus in the Yen, as well as some possible strategy parameters across USD/JPY, EUR/JPY, GBP/JPY and AUD/JPY.

And yesterday I highlighted both USD/JPY and EUR/JPY as price action setups around rates.

Today – there’s not much new to opine on, as USD/JPY has simply jumped up to resistance and, so far, paused. It looks like the pair is waiting on that next driver.

If we end up with higher inflation or hawkish Fed-speak, USD/JPY carries continued bullish potential. On the four-hour chart below, you can see bulls grinding the pair into psychological resistance at 135.00. But, on the other hand, if we end up with some slack in rates with continued pullback, such as we saw after the FOMC rate decision, Yen-strength could re-appear as carry trades unwind. In that event, EUR/JPY may carry some attraction.

The Australian Dollar has been hammered in the maelstrom running through markets this week as several central banks make...

Would A Louder Recession Signal Push The Dow Over The Ledge, Reverse The Dollar?

We have come through a flood of monetary policy from the Fed, BOE, BOJ and others. While the general trend is towards ti...

Asia-Pacific markets face a risk-off day despite a US Dollar pullback driven mainly by Japanese Yen strength following a...

Will Dollar And Risk Assets Sift Through The Fed Decision To The Recession Warning?

The New Zealand Dollar is trading at a critical support level against the US Dollar after the FOMC decision. Asia-Pacifi...

JPY trends have remained in-force as the BoJ remains one of the most loose and dovish Central Banks in the world. Will s...