The US Dollar is on the backfoot again after the market viewed the Federal Open Market Committee (FOMC) meeting minutes as having a dovish tilt.

Notes from the gathering revealed that some board members are considering rate rises of less than the four successive outsized 75 basis point (bp) hikes already seen to date. The last few weeks saw several Fed speakers sing from this song sheet.

Short term interest rate markets had already factored this in with a 50 bp hike at the December conclave before and after this month’s meeting. It continues to do so now.

Treasury yields are softer across the curve, with tenors beyond 5-years particularly so. The 10-year note is below 3.70%.

In any case, Wall Street was quite enamoured with the news and finished higher on the day with the Nasdaq leading the way, adding almost 1%.

APAC stocks are mostly in the green, with the exception China’s CSI 300. More Covid-19 cases were reported across several major metropolises on the mainland.

Elsewhere, Bank of Canada Governor Tiff Macklem crossed the wires with comments that were also interpreted as dovish.

Crude oil sinking didn’t help the Loonie’s cause, and these factors contributed to the Canadian Dollar joining the ‘big dollar’ at the bottom of the currency table. The Japanese Yen has been the best performing currency so far today.

Concerns around the slowdown from China’s lockdowns played a role in oil’s slide, as well a report that EU countries are debating a price cap on Russian supply. It appears that some countries feel that US$ 55 bbl is too generous to Russia.

The WTI futures contract is below US$ 78 bbl while the Brent contract is nearing US$ 85 bbl. Gold has seen modest gains, trading above US$ 1,750.

Germany’s IFO gauge on their business climate will be the data highlight today. A number of speakers from the ECB and Bank of England will be crossing the wires on this Thanksgiving holiday in North America.

The DXY index price has moved below all short, medium and long term Simple Moving Averages (SMA) and this might indicate that bearish momentum is evolving. 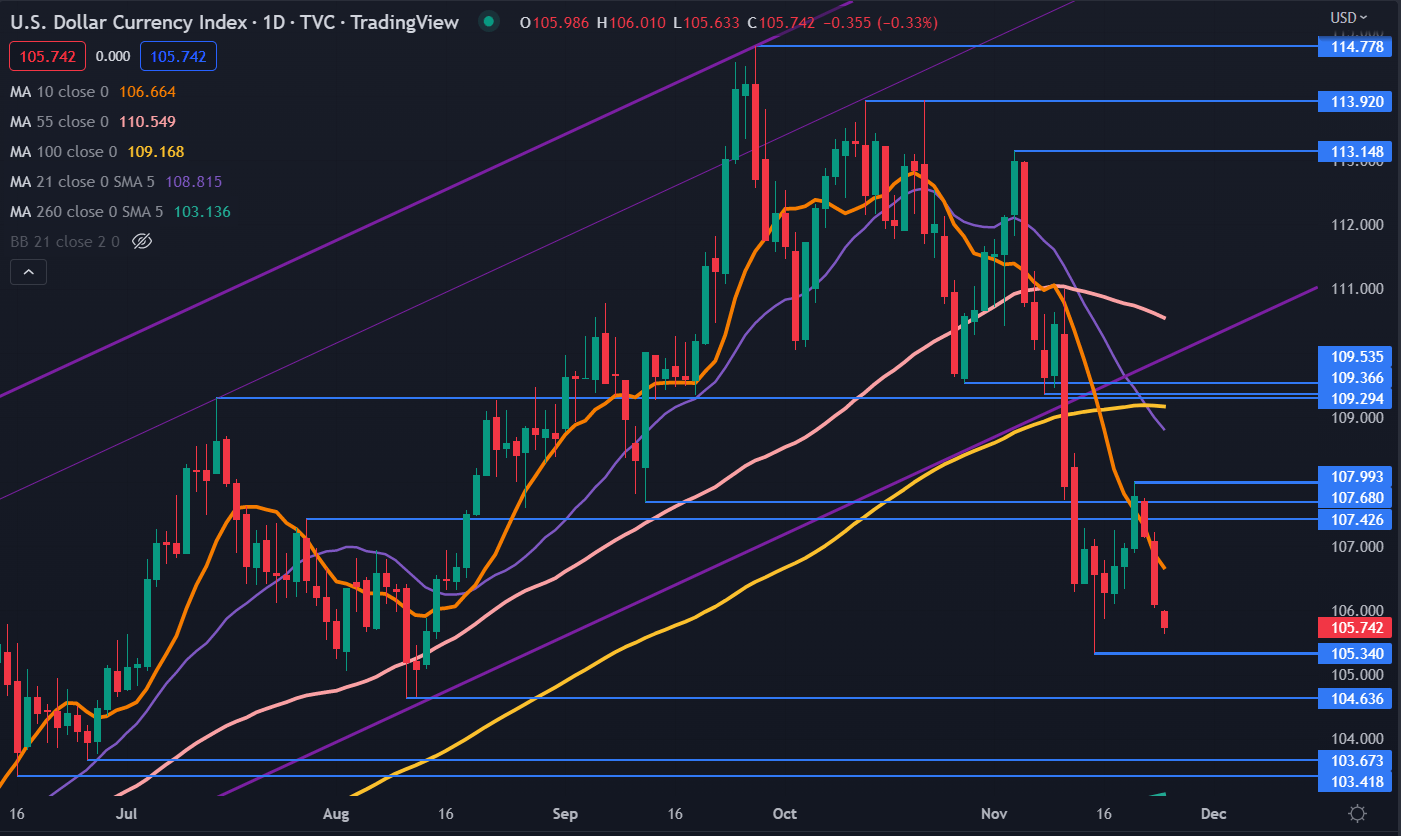