What does it take to pull the markets up from their general slide in 2022? Seemingly, massive and unorthodox monetary policy. This past session, the Bank of England (BOE) stepped in to address the financial distress that has developed in the UK financial system exacerbated by last week’s ‘mini budget’. The United Kingdom was already under duress between the plight of the coming energy crisis, the central bank’s commitment to fight inflation with higher rates and the warning that the economy may already be in recession. After the new government announced its policy mix last week, the already troubling slide in local capital markets and the local currency accelerated sharply…and it started to drag the global markets along for the ride. With a seeming ‘central bank put’ finding its way back to the headlines, markets were willing to indulge some of the transferred responsibility of the past decade. The bounce was fairly broad, but the S&P 500’s biggest rally in 7 weeks seemed a punctuation end to the longest consecutive session decline (six) for the most ubiquitous benchmark since the height of the pandemic back in February 2020. 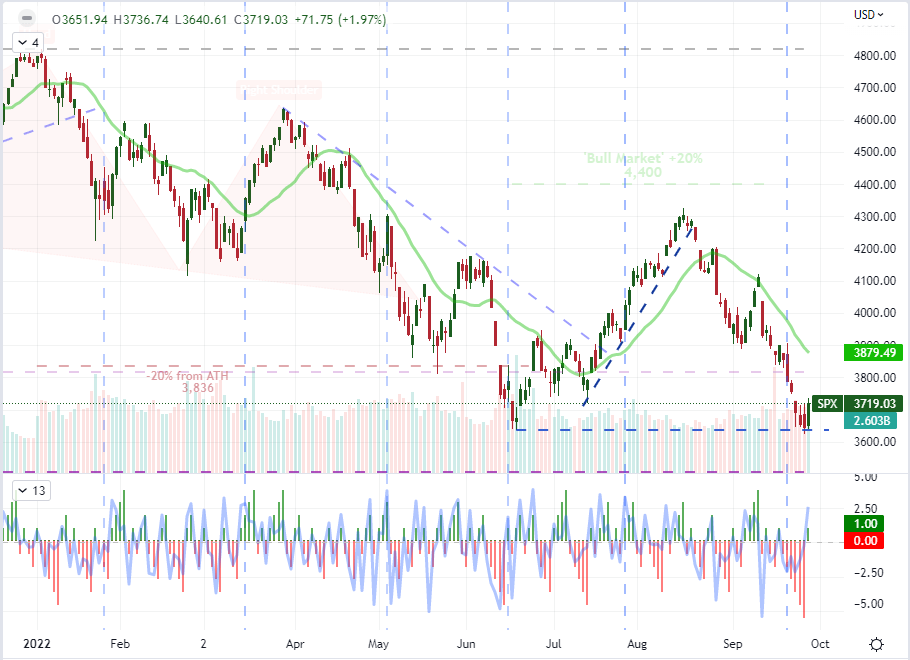 The rebound in risk assets this past session was remarkably broad, but core performance goes to the UK benchmarks. For the local capital market, the FTSE 100’s reversal from intraday lows stands out to both market observers and technical traders. It wasn’t hard to hone in on what the tide changing update was this past session or its timing. The commitment from the BOE to balance out the government’s seemingly dubious fiscal policy plan (the will have a chance to expound at the November 23rd medium-term report) proved a serious market event. The central bank announced it would delay its plans to start selling its holdings of government debt as of Monday and would in turn commit to purchasing an indeterminant amount of long-dated bonds through the near-term. From the UK’s FTSE 100, the news seemed to be well timed relative to technical cues. The abrupt reversal from the index happened to generate a daily ‘tail’ that is commensurate to the swing lows in the 6,800/6,6840 area back to April 2021. 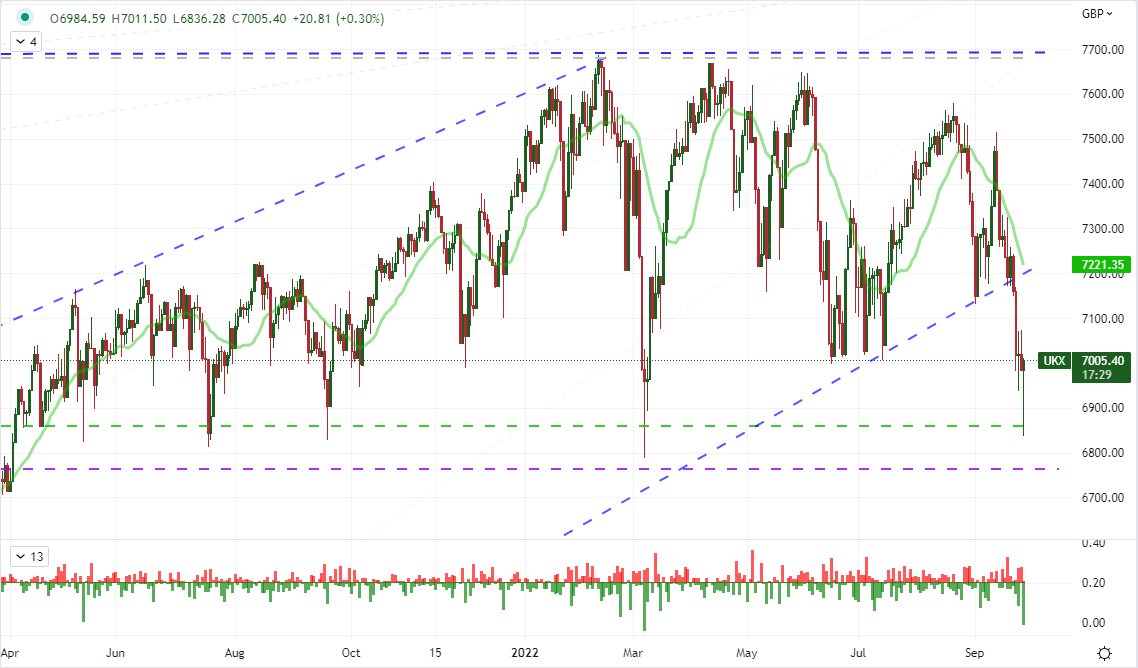 Given the general tide change in global monetary policy with regards to rate hikes and plans to normalize balance sheets (ie sell stimulus back into the market), there has been an expected swing lower in capital market risk measures. Over the past few months, we have heard the unbreakable vow that accommodation would be drained from the system in a bid to fight rampant inflation. That has put the market on serious edge and undercut capital markets that have found the majority of their lift from the indulgence of investors depending on the backstop of the monetary authorities. That fear and market pressure was at least temporarily and narrowly alleviated with the BOE’s announced Gilt purchase program. However, I believe that unless this capitulation proves universal, it will do more add to the instability inherent in competitive policies moving forward. 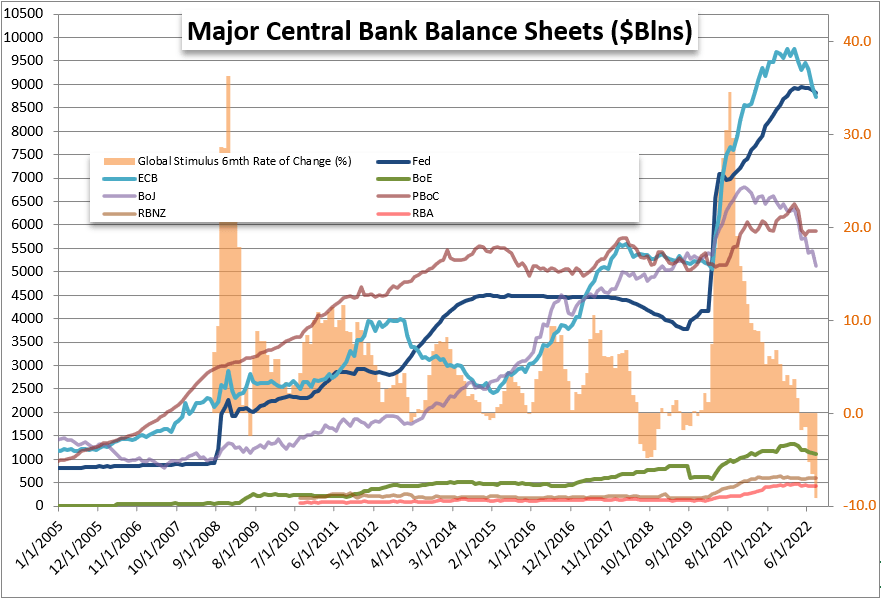 In broader terms, it is worth asking whether the BOE’s policy announcement can evolve from an isolated bid for stability for the UK markets into a broader motivation for risk appetite in the market at large. I remain incredibly dubious of this escalation of confidence. There are two thing that I generally believe are capable of turning the markets systemically: a wholesale change in the economic backdrop (which takes months to unfold) or a full de-leveraging of risk exposure. The charge towards 35 in the VIX certainly raises the profile of implied risks moving forward, but it is far from the extremes usually associated to a market that has capitulated. I roughly consider 50 a mark on the VIX to watch, but it is really a sudden surge in implied – hedging cost for perceived risks – that I’m monitoring. 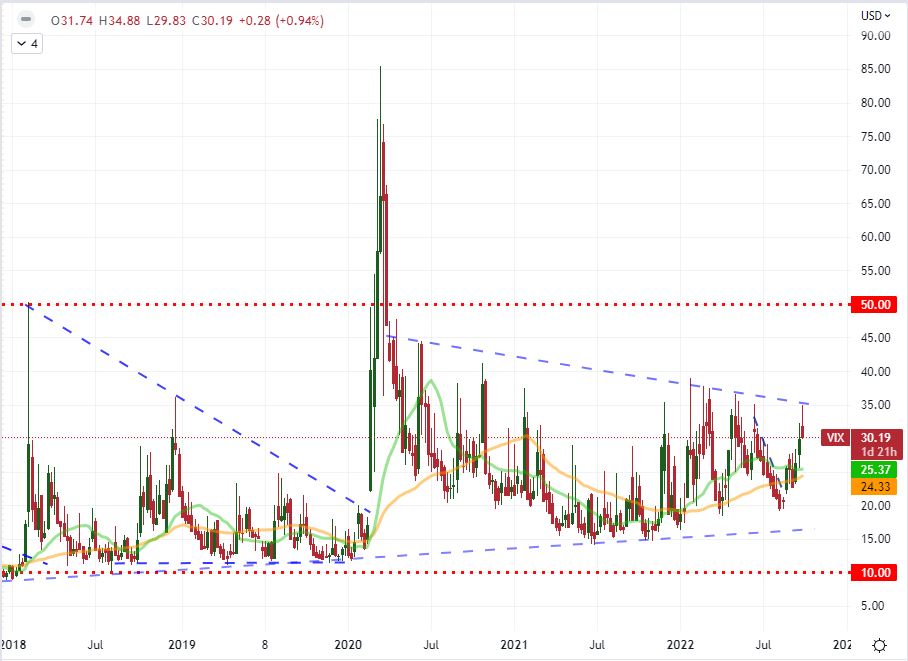 What to Watch For Moving Forward: EURUSD and USDCAD

As we continue into the back half of the week, there is a notable uptick in the weight of the scheduled event risk on tap. While the central bank rhetoric is still of considerable importance, the economic listings may generate more decisive response from the indecisive markets. Setting aside the run of scheduled speaking engagements from Fed, ECB and BOE officials Thursday, I will be particularly interested in the inflation insights on tap from both the Eurozone and US economies. Markets could causally glide past all of these key listings on tap, but they could also hang up on any of one of the high level matters given the uncertain nature of backdrop conditions. 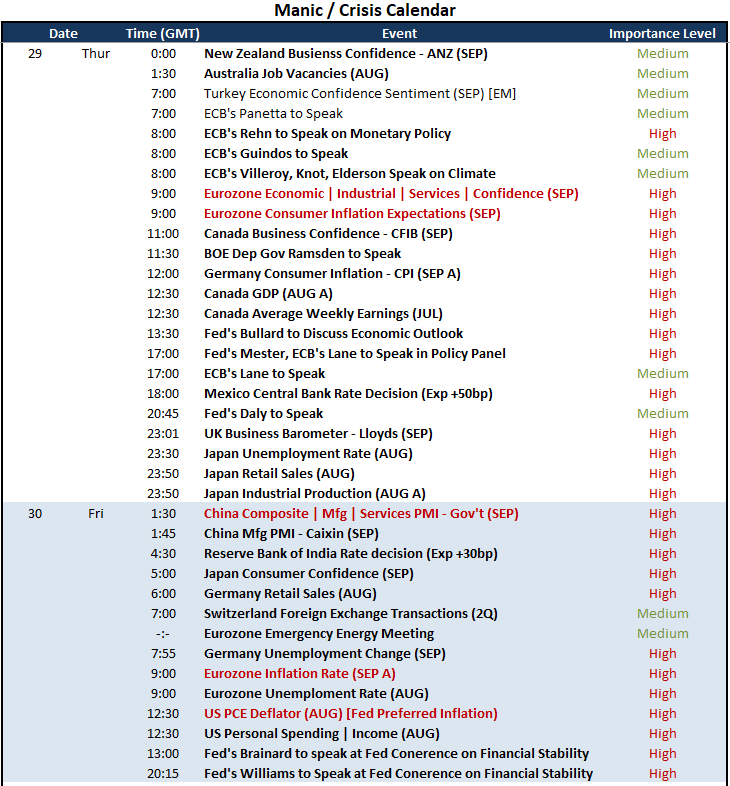 In terms of fundamental weight, the event risk around EURUSD over the next 48 hours is without equal. The pair enjoyed its biggest single day rally (+1.4 percent) in nearly seven months this past session thanks to the spillover effects of the BOE’s actions – both in terms of European financial stability and a more general curb on safe haven demands. Ahead, the fundamental influences will turn more localized. Before we get to Friday’s US inflation report (the Fed’s favorite measure), we will have a run of FOMC officials scheduled to speak through Thursday’s session. As for the Euro’s role, the German CPI, Eurozone sentiment surveys and EZ consumer inflation expectations will offer a potent mix from a provocative area of fundamental interest. 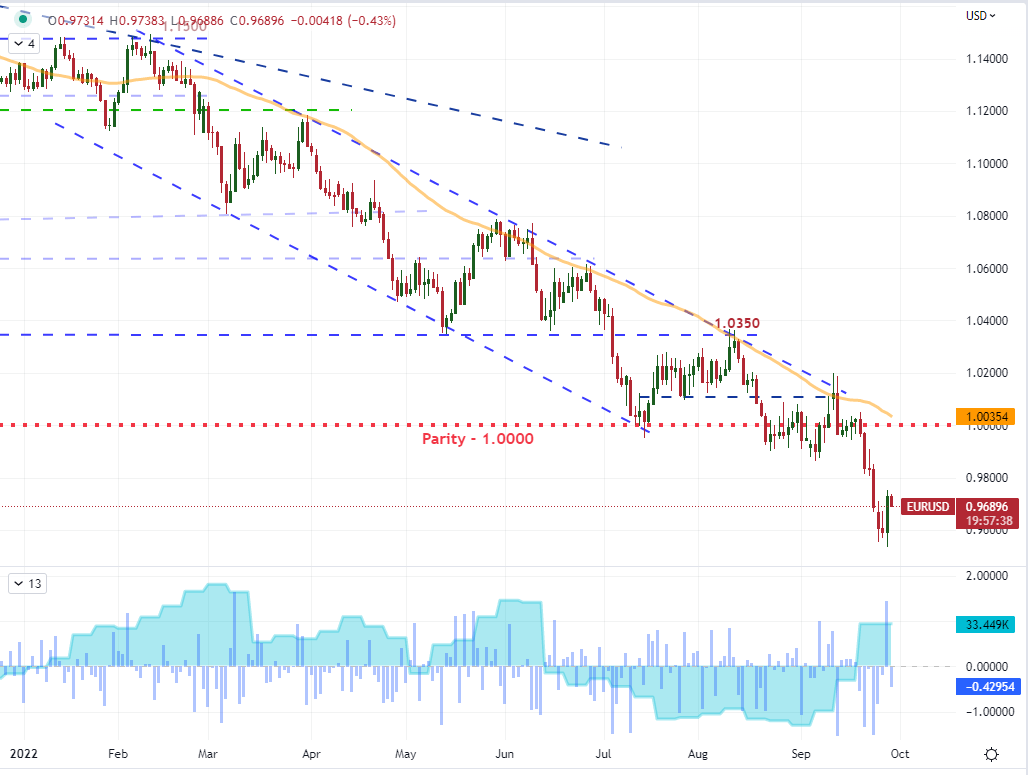 Outside the most liquid currency pair, there is potential for the Canadian Dollar to draw on high profile event risk for volatility. A string of business confidence, weekly average earnings and monthly GDP data can push USDCAD to significant charge at the extreme of an exceptional rent run. For the most targeted event risk, the Mexican central bank rate decision cuts closer to the underlying themes. The group is expected to hike 50bps, but that is fairly tame compared to what the Fed has done or what the BOE is expected to do. What’s more, this is a major emerging market player. Is it enough to force USDMXN out of a massive wedge? It’s worth keeping tabs on. 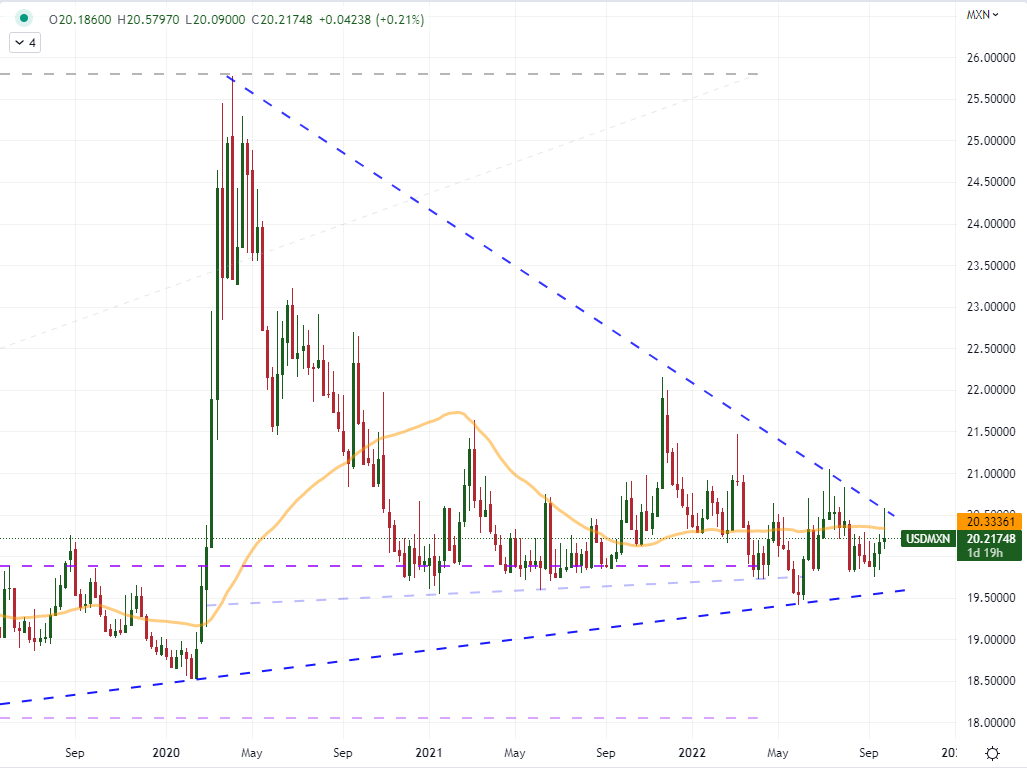