What drivers are expected to move the FX market through the end of the year? Check out the DailyFX Q4 Forecasts.

In the table below, we’ve listed implied volatility (IV) levels for major USD-pairs looking out over the next one-week and one-month periods. Also noted are the differentials between the two, which can help shape expectations and/or identify currency pairs where the options market may be under or over-pricing potential price movement in the short-term. Also outlined, are derived range-low/high prices from the current spot price within one-standard deviation of the current spot price for the one-week time-frame. (In theory, there is a 68% probability that price will remain within the lower and upper-bounds.)

Of notable interest, is the sharp decline in short-term volatility expectations from last week where the differential between one-week and one-month implied volatility held premiums near or over 1% for a majority of the pairs. This reflected the large number of key fundamental events on last week’s calendar. This week, the economic calendar is much lighter and a as a result we are generally seeing expectations diminish as per the options market. On a broader note, one-month implied volatility is at or very near the lowest levels of the year for a couple of pairs, EUR/USD & USD/JPY. With volatility behaving in a mean-reverting fashion, the depressed levels we are seeing may be reaching an extreme and ready to move higher soon.

Short-term relative expectations continue to be heightened for NZD/USD as the RBNZ rate decision arrives this week, while they sink for GBP/USD.

The differential between one-week and one-month implied volatility remains positively skewed for NZD/USD, currently at +1.28%. While kiwi IV has been elevated for some time now, the bid remains somewhat steady this week, despite falling off for others, with the RBNZ meeting this week. The one-week projected range based on the current spot price is 6798-6988. The one-week low is just beneath key support at 6818, and if broken with no other visible support until under 6700, implied volatility is likely to prove underpriced. On the top-side, if kiwi can get into gear and run beyond the top-side projected level it will soon find resistance by way of a retest of the underside of the trend-line running higher since August 2015. Given the trend lower since July and resistance it seems unlikely volatility expansion, if it’s to happen, will take shape on a rally. 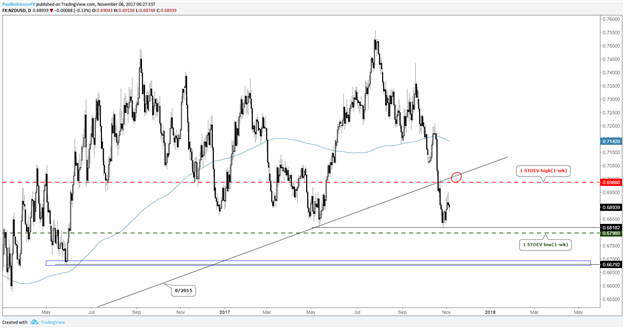 Looking for real-time analysis and/or educational events? Check out the DailyFX Webinar Calendar.

GBP/USD one-week implied volatility has dropped off aggressively since last week’s BoE meeting, where it stood at over 9% for a few days leading up to the event. At 6.70%, it is quite low for cable and the differential between one-week and one-month implied volatility is -0.34%, suggesting we are in for lower levels of volatility over the next week. The one-week projected range is 12988-13232. The projected low is just beneath an important area of support by way of the October low, April parallel, and March trend-line. A firm break of this support would likely lead to a sustained move lower towards 12780, and thus proving options underpriced. On the top-side, trend-line resistance from the September peak stands in the way and happens to align with the projected one-week high. If cable can find enough sponsorship to push it beyond the t-line, it will then have to contend with the region just above 13300, which has proven to be problematic in the past month. Like kiwi, for cable volatility to increase it looks most likely to come on weakness, not strength.