A new quarter is under way, what will it bring? Check out the new Fundamental and Technical Forecasts from DailyFX

The Japanese Yen has managed to staunch the US Dollar’s latest decline against it, but USD/JPY now seems to be in technical limbo and, perhaps, needs a new story to move it along.

Having been under pressure for much of the year, the greenback staged a remarkable fightback in early September. The fundamental underpinning for this was quite simple. The US Federal Reserve clearly plans to keep tightening monetary policy assuming the economic data allow it to do so. Meanwhile, to judge from its own repeated pronouncements, the Bank of Japan will be keeping its own settings ultra-loose until inflation rises sustainably to its 2% target. And the day it does is in the far future, assuming that it ever dawns.

Still, USD/JPY’s rise has now clearly run out of steam in the 112.30 area and, while the pair shows no immediate signs of a sudden retracement back to September’s 107.20 lows, the hour is getting a bit late for Dollar bulls to show resolve.

At present support at 111.70 holds. This level propped the market up at the end of last week and at the end of September. With momentum indicators and moving averages giving very little away on the daily chart, it’s probably safe to say that this level needs to hold if the Yen isn’t to see a more pronounced fightback in the next few trading sessions. A weekly close above this line will probably be very reassuring to US Dollar bulls. 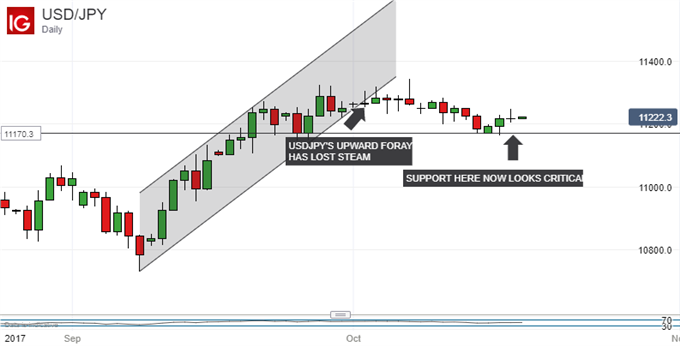 The British Pound has faced broad-pressure in the currency markets this week as the torturous nature of its home nation’s Brexit negotiations is once again rammed home to investors. Still, those interest-rate differentials remain in play. The Bank of England is now thought quite likely to increase UK borrowing costs this year in response to high inflation, drawing similar comparisons with the BoJ to those which apply in the US Dollar’s case. 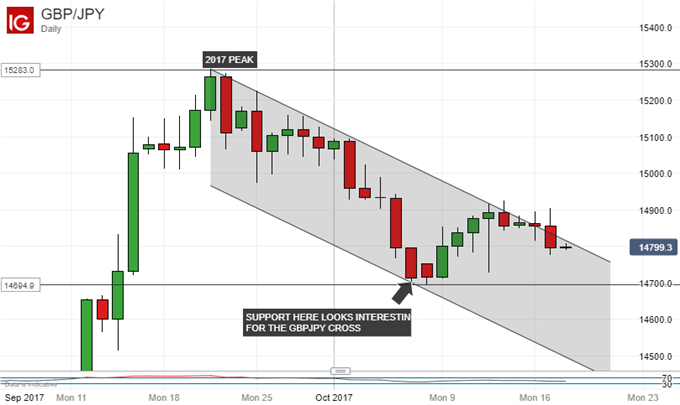 Indeed, for all its political travails Sterling remains close to a decisive breakout from the downtrend which followed the scaling of a new 2017 peak, back on September 21. That said, near-term GBP strength looks like a big ask, and it might be wise to keep an eye on the JPY147 region. That is precisely where the cross bounced the last time it tested this channel support back on October 6.