Gold prices continue to trade on their heels for the past several weeks. The bounce higher in early October has proven temporary as anticipated. We think gold price is working lower in the fourth leg (‘D’ wave) of an Elliott Wave triangle. We are anticipating that gold prices will eventually pressure $1200 before the fifth and final leg of the triangle begins.

According to Elliott Wave theory, triangles consist of five waves where the price extremes contract to form the shape of a triangle. Each wave of the triangle would consist of zigzags, multiple zigzags, or triangles. Therefore, we are anticipating the ‘D’ wave in gold prices to work lower in an A-B-C zigzag pattern.

Struggling with your trading? This could be why. 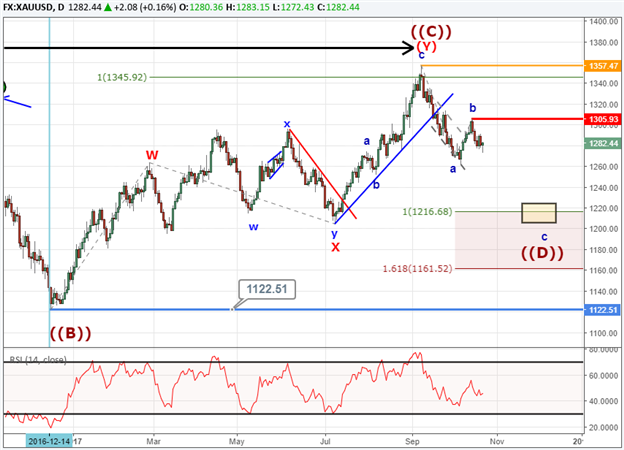 Zooming in on a gold price chart, we can see the first wave of the zigzag is complete. It is possible to consider the second wave, the ‘B’ wave, complete as well (left side below). If this wave count is correct, then gold prices would fall hard in the ‘C’ wave to near $1215.

Another option we are following is that the ‘B’ wave is still carving a sideways flat pattern (right side of chart below). Under this model, prices would bump higher back towards $1305 where another opportunity to short the market would exist. 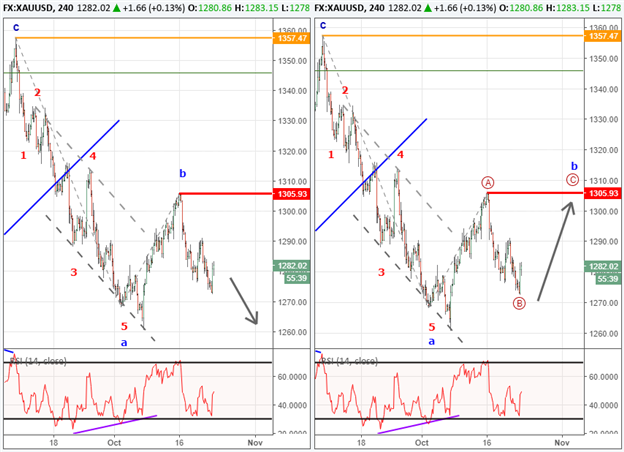 Under both scenarios noted above, the models point to an eventual sell off towards $1200 so long as gold prices remain below the September 8 high of $1357. Shorter term traders could use the $1306 high to maintain a bearish bias against. As mentioned above, a move higher than $1306 does not turn the bias to bullish, but simply delays the bearish pattern we are following.

The bottom line is we look for gold prices continue its trend lower towards $1200 in the ‘D’ leg of an Elliott Wave triangle. We are viewing rallies to be temporary and partial retracements with selling pressure eventually coming back. The key level for this analysis is the September 8 high of $1357. Above $1357, we will need to reassess the Elliott wave count.