Looking for longer-term forecasts on Gold and Silver prices? Check out the DailyFX Trading Guides.

Gold prices have turned higher at the start of the week after news broke that US President Donald Trump had convened with Federal Reserve Chair Jerome Powell and Treasury Secretary Steve Mnuchin during a previously unscheduled meeting. The surprise gathering took place in US President Trump’s personal quarters, not the West Wing, stirring speculation that the additional level of privacy meant there were other factors in play.

Of note, there have been news reports in recent days – which have been drowned out by the televised impeachment hearings and ongoing coverage of the protests in Hong Kong – that the US-China trade war Phase 1 deal may be on the verge of falling apart.

In this context, the meeting between US President Trump and Fed Chair Powell, and the ensuing comments thereafter, has led some (including this strategist) to believe that the Fed is being prepped to cushion the economy from the US-China trade war pre-2020 election. Bad news may be on the horizon regarding the US-China trade war Phase 1 deal.

While other asset classes don’t like increased volatility (signaling greater uncertainty around cash flows, dividends, coupon payments, etc.), precious metals tend to benefit during periods of higher volatility. Heightened uncertainty in financial markets due to increasing macroeconomic tensions (like US-China trade war or the prospect of a no-deal, hard Brexit, for example) increases the safe haven appeal of gold and silver. 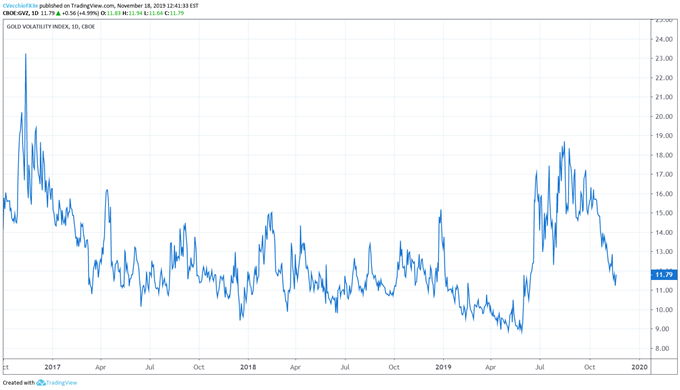 Gold volatility (as measured by the Cboe’s gold volatility ETF, GVZ, which tracks the 1-month implied volatility of gold as derived from the GLD option chain) has rebounded to 11.79, its largest one-day increase since October 24. 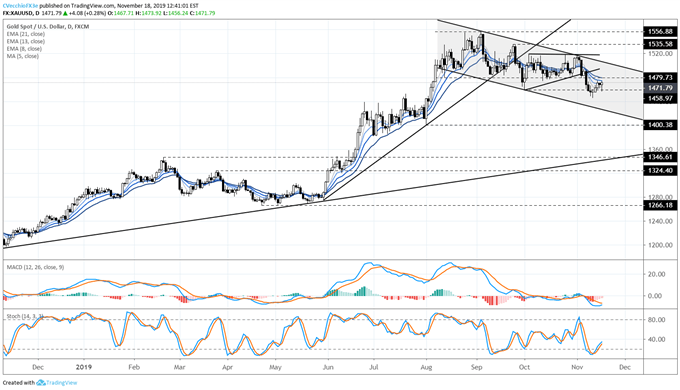 But gold prices continue to tread against the current, having traded back above the daily 5- and 8-EMAs, running into resistance at the daily 13-EMA today. Daily MACD is turning (albeit still in bearish territory), while Slow Stochastics have continued their advance out of oversold territory.

The bullish outside engulfing bar forming on the daily timeframe, assuming a close above 1471.29 (the high on November 15), bodes well for gold’s near-term prospects. If gold volatility continues to edge higher, it’s very possible that gold prices move above 1483, which would provoke an upgraded assessment. 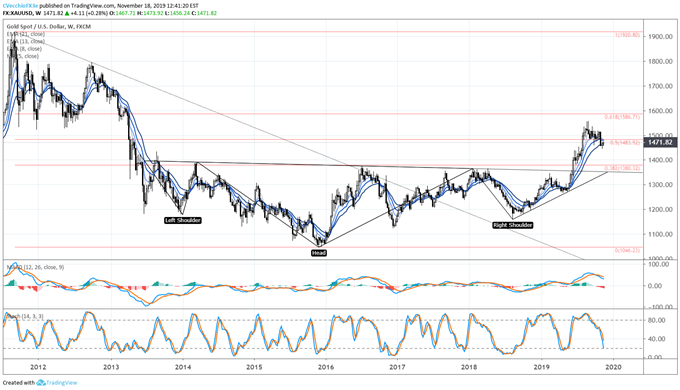 The weekly timeframe moves at a glacial pace, and thus there is no change since the last gold price forecast update. The gold price pullback since the October Fed meeting must be viewed in context of the longer-term technical picture: the gold price inverse head and shoulders pattern that originated earlier this year is still valid. Only a break below the August 1 bullish outside engulfing bar low at 1400.38 would draw into question the longer-term bullish potential. 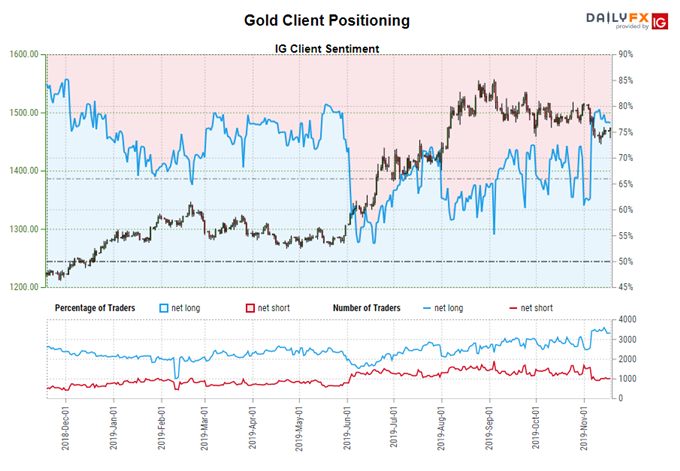 Whether you are a new or experienced trader, DailyFX has multiple resources available to help you: an indicator for monitoring trader sentiment; quarterly trading forecasts; analytical and educational webinars held daily; trading guides to help you improve trading performance, and even one for those who are new to FX trading.

View our long-term forecasts with the DailyFX Trading Guides

NZD/JPY is on the cusp of trend-defining resistance, but US-China tension over Hong Kong could spoil risk appetite and c...

NASDAQ closes at a new record high   A look at the final numbers are showing:

With stocks trading near highs, risk on pushes the AUDUSD to a retest of the  weeks highs The AUDUSD is up at testing...

Pair trades between 50% retracement above and 100  day MA below. The GBPUSD has settled in with resistance up at the ...

Him in the The Dow leads the way today The US stock markets are open and it is a another positive day (at least at the...