Gold prices are consolidating since our previous report though the outlook remains the same. The gold price forecast is for gold to work lower and possibly retest $1200.

Since it appears we are in the ((D)) wave of the triangle, we are expecting this wave to take the shape of a zigzag pattern. We are almost halfway through the zigzag pattern. We illustrated two potential options on the intraday chart in our previous report “Gold prices may see $1200 in the coming weeks”. Both options are still possible so zoom out and keep an eye on key levels. For example, any strength up towards $1306 may be temporary. A break down below the October 6 low of $1260 may hint that the ‘c’ wave of the zigzag is already underway.

Struggling with your trading? This could be why. 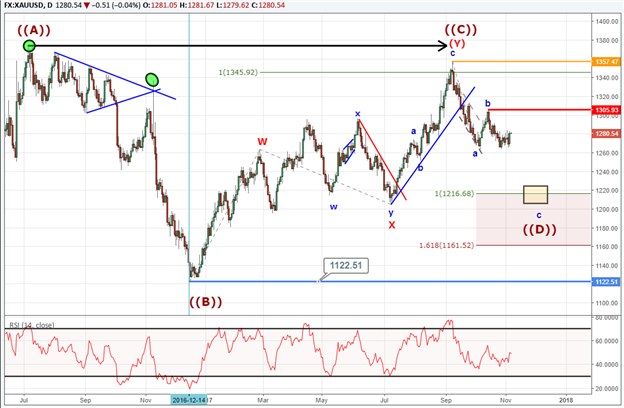 The Elliott Wave models are pointing to an eventual sell off towards $1200 so long as gold prices remain below the September 8 high of $1357. Shorter term traders could use the $1306 high to maintain a bearish bias against. As mentioned above, a move higher than $1306 does not turn the bias to bullish, but simply delays the bearish pattern we are following.

The bottom line is we look for gold prices continue its trend lower towards $1200 in the ((D)) leg of an Elliott Wave triangle. We are viewing rallies to be temporary and partial retracements with selling pressure eventually coming back. The key level for this analysis is the September 8 high of $1357. Above $1357, we will need to reassess the Elliott wave count.

USD/JPY stalls but holds above support.