The gold price slipped today, despite a weakening US Dollar that saw most other commodities rally. It is trading near US$ 1,785 an ounce. This is being attributed a bump up in real yields after US inflation data.

The market reaction to US CPI was to buy risk across all asset classes. Equities, commodities and growth linked currencies got a boost while bonds and currencies with defensive characteristics were sold.

An exception to the latter was the Japanese Yen, It roared higher on the notion that US yields would be heading south. Yields did initially dip on the US CPI release, but language from two Fed speakers reversed the moves.

The Treasury market appears to be acknowledging a very hawkish Fed, while equity prices appear to reflect the end of aggressive rate hikes. The 2s 10s part the yield curve remains inverted near 22-year lows.

Federal Reserve Bank of MinneapolisPresident Neel Kashkari said that the idea that a rate cut is possible next year is unrealistic with inflation where it is.

His comments were supported by Federal Reserve Bank of Chicago PresidentCharles Evans when he said that he sees rates rising into year end and next year.

The boost to Wall Street took the Nasdaq 2.89% higher. All the major equity indices in APAC are up 1 – 2% as a result of the positive lead.

Crude oil has held its gains, despite U.S. Energy Information Administration data that showed US oil stocks rose by 5.5 million barrels last week, much more than the 73k forecast.

The WTI futures contract is near US$ 91.60 bbl while the Brent contract is a touch above US$ 97 bbl.

Elsewhere today, the Peoples Bank of China (PBOC) released a report that warns on inflation risks for the Chinese economy. They see inflation eclipsing 3% in 2022 against yesterday’s print of 2.7%, a two-year high.

After the reaction to US CPI, US PPI due out later today could provide some fireworks. San Francisco Fed President Mary Daly is also due to appear on Bloomberg television.

GOLD AGAINST US 10-YEAR REAL YIELD AND USD (DXY) INDEX 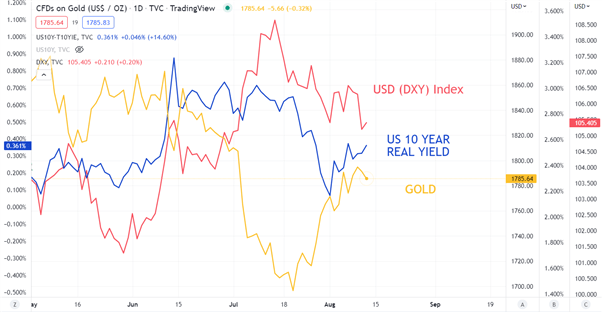 We have brought to a close the month of September and in turn the third quarter of the year. Moving into the new week, m...

We are heading into the final trading day of the week, month and quarter; and the markets are already experiencing signi...

The Australian Dollar is in focus ahead of Chinese PMI data following a downbeat session on Wall Street. A beat on the d...

Gold has abated in Asia after a stellar day prior on the back of a deteriorating US Dollar and a drop in yields as the m...

The New Zealand Dollar took advantage of a broader pullback in the US Dollar, outperforming its major peers, including t...