The importance of trading psychology can’t be understated. Check out this beginner’s guide – Building Confidence in Trading.

In the following table, you’ll find levels of implied volatility (IV) for major USD-pairs looking out over the next one-day and one-week time-frames. Using these levels, we’ve derived the range-low/high prices from the current spot price within one-standard deviation for specified periods. Statistically speaking, there is a 68% probability that price will remain within the lower and upper-bounds.

GBPUSD one-day implied volatility at 18.7%, which is nothing unusual; would likely require a material surprise by the BoE to prove underpriced

Later this morning at 11:00 GMT time, the Bank of England is expected to stand pat at 0.25% on its record-low benchmark rate and keep its asset purchase target at £435b. While this is the expected outcome, the potential catalyst for volatility is on the split among voting members. At the last meeting, the MPC voted 7-2 in favor of keeping rates unchanged. Another 7-2 vote would be taking a ‘wait-and-see’ approach, which may put pressure on sterling as my colleague, David Song, pointed out in this piece. That could certainly be the case given the large run-up into the meeting over the past week-and-half (yesterday aside). With cable having had a sharp rise, a hawkish stance with more members voting in favor of raising the benchmark rate could provide a boost. But with GBPUSD already at lofty levels, a 6-3 vote may not provide the catalyst needed to push cable much higher in the near-term.

What is the options market projecting for today, over the next week?

One-day implied volatility at 18.7% is high, but not through the stratosphere high. It was over 18% at one point yesterday morning, too. Looking back at last week, USDCAD implied volatility heading into the BoC meeting was nearly 23%, which turned out to be a little underpriced as the central bank surprised with an increase in rates. But keep in mind, there was a 44% probability of a rate increase in Canada, none is expected in the UK today. That would indeed be a big surprise and implied volatility would prove to have been grossly underpriced. But again, that is the highly unlikely scenario.

The projected one-standard deviation range for today clocks in between 13078 and 13336. The upper threshold is just above yesterday’s high, and implies we aren’t likely to sustain trade beyond yesterday’s high by the New York close. The one-week projected high is of interest, with the 13402 level right in the vicinity of an upper parallel extending higher from since February and near key resistance formed not long after the ‘Brexit’ vote. Should we see further strength into the 13400/13500 area over the near-term, look for price action to validate the area as resistance and a spot from which cable may make a material turn lower. Looking on the downside, neither the one-day or one-week projected lows are near any price levels of interest. 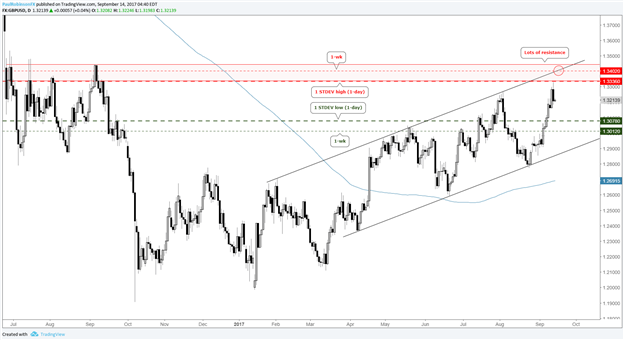