Find out in our Q4 Forecast what is expected to drive the FX market through year-end.

In the following table, you’ll find implied volatility (IV) levels for major USD-pairs looking out over the next one-day and one-week time-frames. Using these levels, we’ve derived the range-low/high prices from the current spot price within one-standard deviation for specified periods. Statistically speaking, there is a 68% probability that price will remain within the lower and upper-bounds.

One-day implied volatility is generally elevated across the board with the FOMC rate announcement later today at 18:00 GMT time. They are higher than usual, but nothing out of the ordinary. This isn’t surprising given that the Fed is expected to hold on rates and is widely-expected to raise at next month’s meeting. But traders should still be on their toes for heightened volatility, especially if there is anything in the statement which undermines potential for a rate increase in December.

GBPUSD tops the list with overnight implied volatility at 17.54%, which isn’t surprising given ‘Super Thursday’ is tomorrow. The one-day projected range from current spot price is 13175-13419. The next highest overnight IV level is in NZDUSD options at 13.69%. We’ve already seen a sizable move out of kiwi in overnight trade with the help of better-than-expected employment data. The one-day range projected range is 6853-6951. USDJPY is close behind kiwi with a one-day IV level of 12.14%, which points to a daily range low/high of 11331-11475.

At the bottom of the list is EURUSD, with a one-day implied volatility of 9.57%, and it's one-week is even more strikingly low at 6.40%. Last week, a dovish ECB sent the euro down below neckline support of a head-and-shoulders pattern developing since early August. The bias is for lower prices based on the technical break. But also to consider – the euro is known as the ‘anti-dollar’, and any big movement on FOMC in the FX market, or any other fundamental events coming up in the near-term (i.e U.S. NFPs on Friday), may be underpriced given how low implied volatility is. Perhaps the options market is right to price expected movement so low, but markets aren’t always right.

The projected one-day range is 11580-11696 and the one-week is 11535-11741. The top-side levels are of interest, in that they look likely to be the most difficult to exceed given resistance levels the euro will need to trade through. On the down-side is where the options market may be most likely mispricing, with the path of least resistance, as per the triggered H&S formation, is lower. 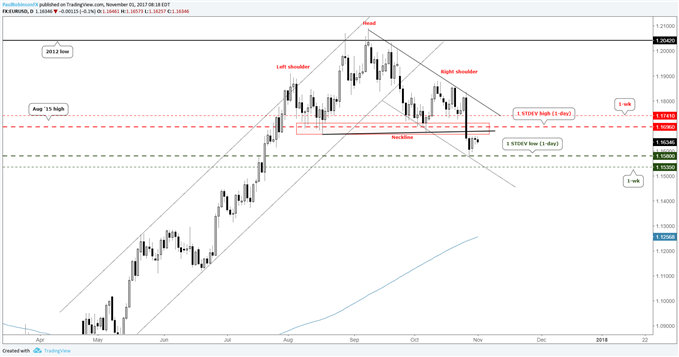