Retail traders are short EUR/USD, see what this may mean in the short-term on the IG Client Sentiment page, and for the longer-term technical and fundamental outlook, check out the DailyFX Q1 Forecast.

The euro retraced to start last week, but finally broke out above the 2017 high. With EUR/USD trading in breakout territory, we will turn to the area surrounding last year’s high of 12092 as a source of support (former resistance becomes new support).

On Friday, the euro rallied to the top-side trend-line which connects the 2016 and 2017 highs, and while top-side trend-lines following breakouts aren’t considered the most significant form of resistance, it could be enough to cause upward momentum to stall.

The first minor price level to watch comes in at a swing-low created during the swoon of 2014; it arrives at 12247, not far beyond the 2016/17 trend-line. It’s not viewed as major resistance, but like the aforementioned trend-line, especially given the two forms of resistance are in near confluence, it could give cause for a pause at the least.

If both of these levels/lines are overcome, then there isn’t anything meaningful until the trend-line running down off the 2008 high, which isn’t until the 12500s. It’s unlikely we’ll have to concern ourselves with that in the coming week, but worth noting for later-on.

From a tactical standpoint, initiating new long positions to start the week doesn’t hold great appeal given the extension seen the past couple of days into possible roadblocks. Shorting into strong momentum isn’t appetizing, either. A pullback to support or consolidation could offer a decent risk/reward opportunity with a little patience. 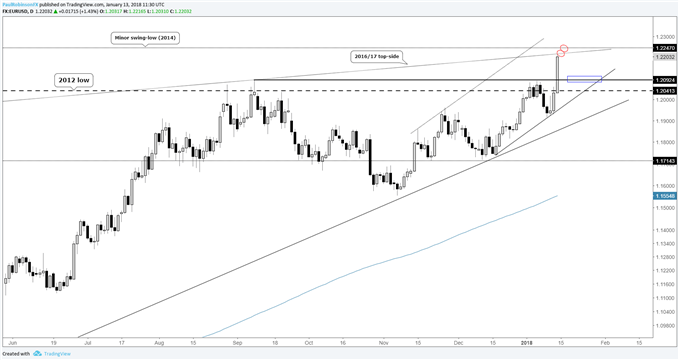