What drivers are expected to move EUR/USD through the end of the year? Check out the DailyFX Q4 Forecasts.

In the table below, we’ve listed implied volatility (IV) levels for major USD-pairs looking out over the next one-week and one-month periods. Also noted are the differentials between the two, which can help shape expectations and/or identify currency pairs where the options market may be under or over-pricing potential price movement in the short-term. Also outlined, are derived one-week range-low/high prices from the current spot price within one-standard deviation. (Theoretically, there is a 68% probability that price will remain within the lower and upper-bounds.)

EUR/USD implied volatility hasn’t climbed to the top of the leaderboard, but less than two weeks ago one-month implied volatility was at its lowest levels since 2014, with a reading of only 5.49%. Since then it’s jumped to 7.59% and closing in on the highest level seen since September when it peaked at 8.68%. One-week IV has also risen sharply, moving from 5.12% to 7.38%. These sudden jumps in volatility are a welcomed event for traders and could mean we are in for a sustained period of larger price swings.

The ’head-and-shoulders’ pattern so widely-watched by market participants the past couple of weeks is in the process of getting shredded as yesterday’s powerful move ripped through the ‘neckline’ of the pattern, and in the process the trend-line running down off the September high was also broken. This opens up a path for higher prices, but the euro must first contend with an area of stiff resistance around the 2010 low at 11876. This has been a point of interest for both sides of the tape since August and a pullback off this area could certainly be in store, but if it’s a constructive pullback then a rally to higher levels becomes the probable scenario. If we see a pullback at all. A breakout above resistance will also constitute a higher-high from the October high and snap the downtrend sequence in place from early September.

Looking to projected high/low levels, one-week implied volatility points to a 1-stdev weekly range of 11715-11957. The projected low arrives above the ‘neckline’ and in an area of solid support dating back to August. If the euro is to continue higher it is unlikely to break below this important support zone and is viewed as spot likely to see ‘would-be’ longs take a stance. On the top-side, if the projected range-high is seen then a breakout above the aforementioned resistance in the 11876-area will have been clearly achieved, building a case for a move to the 12000/100 zone surrounding the 2012 lows.

Looking for real-time analysis and/or educational webinars? Check out the DailyFX Webinar Calendar. 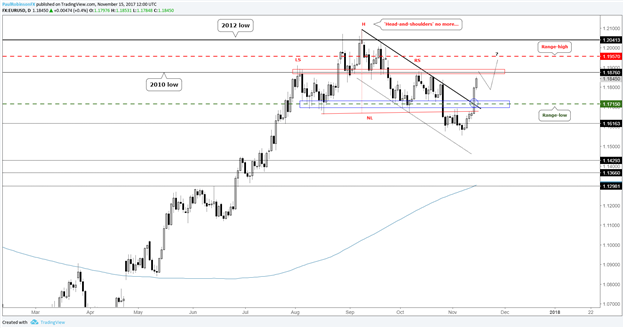