*Through calculating the 1-standard deviation estimated range, this suggests that there is a 68% statistical probability that these pairs will trade within this range. 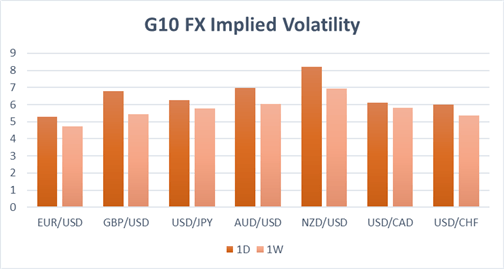 This week will see the release of key US releases with US CPI and Fed Chair Powell’s testimony, however, despite this, implied volatility across FX markets remains relatively subdued. That said, implied vols for the antipodean currencies (AUD, NZD) are slightly firmer this week, given that Fed Chair Powell’s testimony will also be critical to the broader risk sentiment. As a reminder, last weeks better than expected NFP report saw both the AUD and NZD come under pressure from a bid in the greenback, alongside the drop in across equity markets.

EURUSD: Despite signs that a slowdown is appearing more evident within the global economy, FX volatility has remained subdued, particularly in EURUSD, which has seen back to back tightest quarterly ranges on record. Current 1-week implied vols are among the lowest this year at 4.68, while the decline in demand for Euro calls over puts has seen the risk reversal drop to a neutral 0.2. Consequently, this suggests that the range trading looks set to persist in EURUSD. 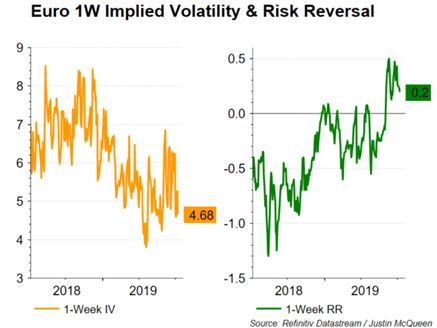 USDCAD: The focus for CAD traders will be on the Bank of Canada rate decision, in which expectations are for the central bank to maintain interest rates at 1.75%. As such, eyes will be on the monetary policy statement and whether the central bank joins the dovish global shift. Given the improving data in the Canadian economy, the BoC may refrain from joining the dovish global shift and instead upgrade its assessment of the domestic economy, thus reducing bets of easing from the BoC. Consequently, risks remain tilted to the downside for USDCAD, however, with risk reversals relatively neutral, downside could potentially be contained. 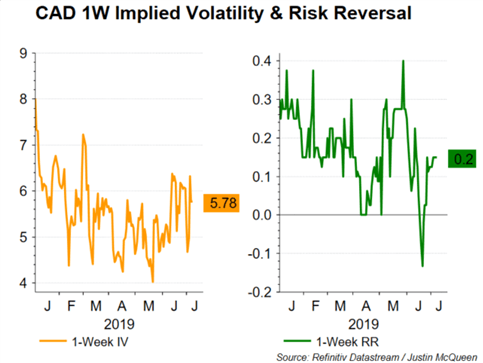 For a more in-depth analysis on FX, check out the Q3 FX Forecast