See our quarterly EUR forecast to learn what will drive prices throughout Q3!

Italian politics will take center stage for the Euro with Prime Minister Conte set to face a no-confidence after he addresses the Senate from 1400BST. However, despite the increased political uncertainty, while the Bund-BTP spread has widened over 4bps this morning, showing a rise in risk premium. This has not been reflected in the FX space with Euro implied vols notably subdued at 5.9, suggesting a potential underpricing of the risks attached to Italy. Consequently, EUR/USD O/n ATM break-evens imply a meagre move of 27pips(meaning that option traders need to see a move of at least 27pips in either direction in order to realise gains) 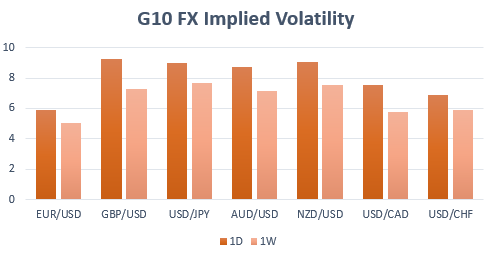 Rising Odds of a Snap Election

If PM Conte loses the no-confidence or resigns before the vote takes place, President Matttarella will have two options. Either gather party leaders in order to form a technocratic government with the sole purpose of passing the 2020 budget (due October 15th) or call for snap elections, which could take place as soon as the Autumn (most bearish scenario).

Technocratic Government: This would likely be the most supportive scenario for the Euro and Italian BTPs. However, the difficulty is that the 5 Star Part have explicitly ruled out forming an alliance with the center-left PD party.

Snap Elections: Failure to form a temporary government raises the likelihood of snap-elections as soon as the Autumn. This would likely be the most bearish scenario for the Euro, potentially pushing the currency below the 1.10 handle, given the increased uncertainty surrounding the passing of the 2020 Budget, while the League party have also seen a commanding lead in opinion polling.