See how retail traders are positioning in the FX majors, indices, gold and oil intraday using the IG speculative positioning data on the DailyFX Sentiment page.

Implied volatility levels underlying oil have sunk to the same low levels that have plagued so many other physical and capital market assets across the financial system. Yet, this lack of anticipation and even the lack of a clear trend for this commodity hasn’t tempered speculation behind the the market. In fact, the reality is quite the opposite. We have seen volume steadily rise; while just this past week, net speculative futures positioning posted a record swing in exposure. Does this portend a coming change in this important market or has speculation simply run far ahead of actual market activity?

Taking a look at recent price action for US-based crude oil, the abnormal turnover isn’t obvious at first blush. While there are notable swings over the past year, they are hardly of the violent or persistent nature that we have seen from this and other markets in previous cycles. Recently, the WTI (West Texas Intermediate) standard has been unable to break from a 50 – 42 range over the past three months. Looking further back, the energy benchmark has seen a moving 12-month range that is the smallest since the Summer of 2014 – competing with current conditions for title of the most complacent periods in recent financial history. 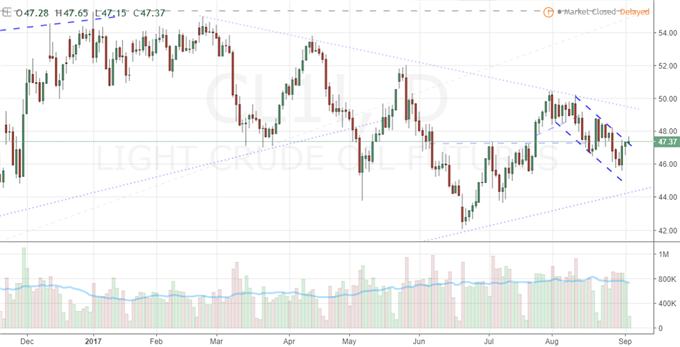 Yet, when we look at a little more historical context; a different view of the market starts to emerge. Despite the reduced range and the dimimished volatility readings from measures like the CBOE’s Oil Volatity Index, we find that volume has climbed to record highs that have more than doubled the averages of the from just three years before. Similarly, open interest (total participation in the market) has soared to a record high in a persistently rising trend. 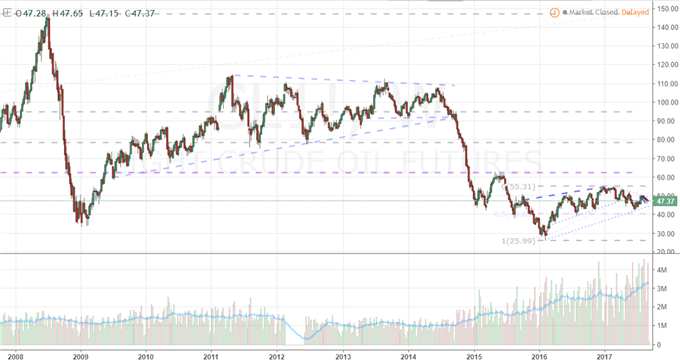 There are a number of possible explanations for this dramatic shift in market activity – though there is no way to claim one is the definitive reason. The growing interests among producers from OPEC’s members to emergent US shale producers creates an effort to promote market direction and transferring transactions to other financial centers around the world (more US oil means more US transactions). Crude may capture more of the global speculative interest because it carries more volatility than the likes of equities and doesn’t draw the skepticism surrounding a persistent trend that shares earn. Perhaps this is the evoluation of a market that is slowly being replaced due to inevitable supply and demand constaints (peak oil and alternative energy).

Regardless, we have seen what it can do to positioning and market levels. Below is the CFTC’s Commitment of Traders (COT) report highlighting net speculative positioning in oil specifically. Besides the deviation in long interest and the mundane level of the commdity itself, we have the measure of weekly change in speculative bearing. As it happens, this past week’s net change in the (persistently) long exposure of the market suffered its largest drop on records going back decades to the tune of 75,983 contracts. 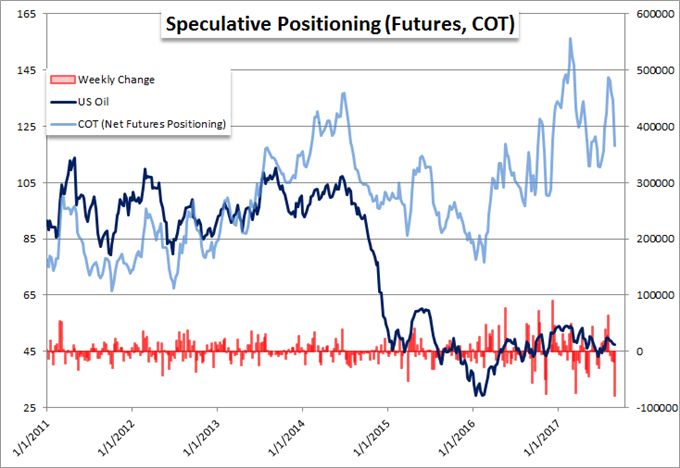 Though this past week’s swing in the net long position is the largest on record, there have been a few proximately large bearish dives that have followed otherwise abrupt but limited slides in price action – legs through November and March. Both of those previous instances called short-term bottoms but certainly didn’t rebalance speculation and promote the next trend. This time around, the price slump was far more modest, which likely is supported by fundamental factors such as the additional glut added by Hurricane Harvey as well as the tentative fade of concern related to the North Korea-West tensions. Will that restraint evaporate? Time and volatility will tell. 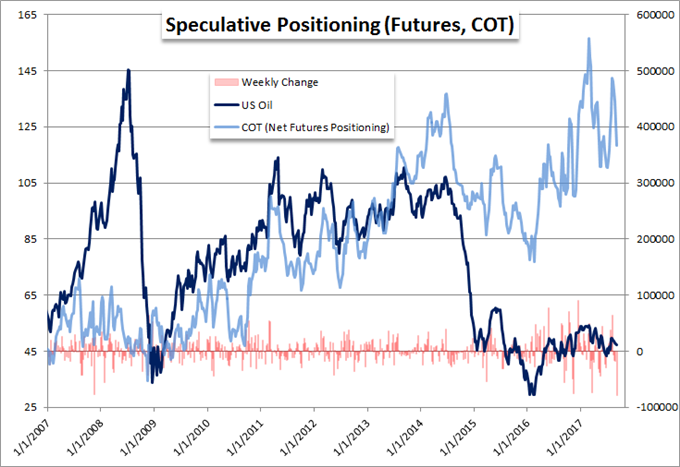