WTI crude oil made a small recovery in Asia today after hitting a 6-month low of US$ 87.01 on Friday as the US Dollar found support across the board.

Data from energy technology company Baker Hughes showed a small drop of oil rigs operating in the US last week. It fell by 7 rigs to 598 compared to 387 oil rigs in operation a year ago.

Asian markets have started the week fairly muted as the fallout from Friday’s US non-farm payrolls data continues to be digested. Data showed 528k jobs were added in July against forecasts of 250k.

This is the most inverted it has been since the tech wreck of 2000. An inversion might be suggestive of an economic slowdown ahead.

San Francisco Fed President Mary Daly re-iterated the central bank’s hawkish mantra over the weekend, saying that the Fed was nowhere near done in their fight on inflation.

She said that a 50-basis point hike at their late September meeting was her baseline case, and the incoming data will be watched closely. This week will see CPI and PPI in the US on Wednesday.

Chinese and Hong Kong stocks drifted lower despite a better-than forecast mainland trade surplus of US$ 101 billion. It is on the back of exports coming in stronger than expected but imports trailing estimates.

This highlights soft domestic economic conditions in China versus the rest of the world, which is opening up in the post pandemic era. A lockdown in the holiday resort area of Hainan has seen 80k tourists unable to go home. The property sector also continues to plague the Chinese economy.

The Australian Dollar is slightly higher to start the week while gold is steady near US$ 1,772 on Monday.

It is a very light data day to start the week. The full economic calendar can be viewed here.

WTI has fallen in price at the same time that backwardation has moved lower. Backwardation occurs when the contract closest to settlement is more expensive than the contract that is settling after that first one.

It highlights a willingness by the market to pay more to have immediate delivery, rather than having to wait. With backwardation falling back to levels seen before the Russian invasion of Ukraine, it may allow for prices to continue lower. 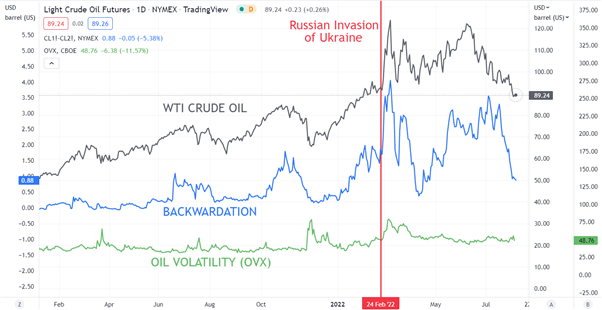 The Australian Dollar has been hammered in the maelstrom running through markets this week as several central banks make...

Would A Louder Recession Signal Push The Dow Over The Ledge, Reverse The Dollar?

We have come through a flood of monetary policy from the Fed, BOE, BOJ and others. While the general trend is towards ti...

Asia-Pacific markets face a risk-off day despite a US Dollar pullback driven mainly by Japanese Yen strength following a...

Will Dollar And Risk Assets Sift Through The Fed Decision To The Recession Warning?

The New Zealand Dollar is trading at a critical support level against the US Dollar after the FOMC decision. Asia-Pacifi...

JPY trends have remained in-force as the BoJ remains one of the most loose and dovish Central Banks in the world. Will s...