Traders are buying into Bitcoin weakness, see what this might mean about future price direction on the IG Client Sentiment page.

Magnitude of sell-off in Bitcoin suggests it might be broken

Massive pullbacks have been the norm for Bitcoin during its rise meteoric rise, but the one it is undergoing now might be an event it doesn’t recover from. So far, the decline from the December high to now is approaching 50%, and while during 2017 we saw 30%+ declines take shape, the fact it is this far off the high, after the massive and manic surge, suggests the 'animal spirits' may have finally broken.

We’ve been discussing the slope from May as an important one given its numerous inflection points on the way up, and that it would become important support. Yesterday, Bitcoin closed below this threshold, and is threatening to break the July trend-line.

A break of the July trend-line looks likely to lead to the first visit of the 200-day MA (currently 7120s and rising) since August 2016. The next big major swing-low doesn’t arrive until 5555. Perhaps this sounds overly bearish, but if the cryptocurrency mania has ended that may look optimistic when all is said and done. Of course, there will be bounces (likely big ones) along the way even if this holds true... 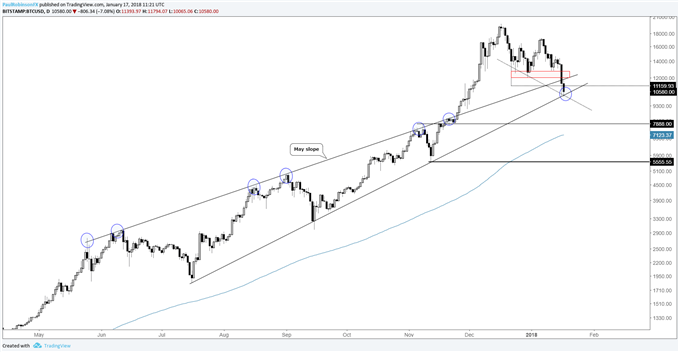 Ethereum reversal of fortune could take it back to wedge breakout

Ethereum broke the trend-line from December and is threatening to break the December high, which if broken leaves the November trend-line up next in the low-700s. Should that falter, and cryptocurrencies are to see speculative positions continue to unwind, a full reversal of the rise from the H2, 2017 wedge may unfold.

This would mean there is over 50% more to go on the downside to near 400. It may not happen in a straight line, as buyers still buy the dip, but a reversal of the surge out of the rally isn’t out of the question at this point. 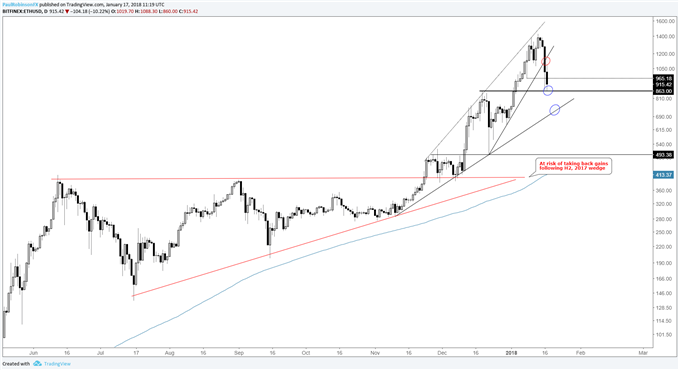 Ripple could take back the gains from late-2017 breakout

Ripple is now appearing to have been the late-comer to the party. Similar to Ethereum, it put in a massive bullish wedge during the second-half of last year. A full-reversal of its wedge would take it all the way back to $0.28. Indeed, a massive drop, but given where it is coming from it’s not out of reason.

It may see a big counter-trend rally, but again, if cryptocurrencies are to trade much lower, it would likely be a short-lived event. 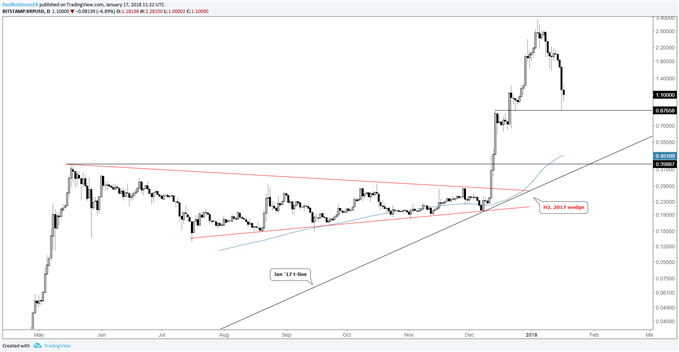