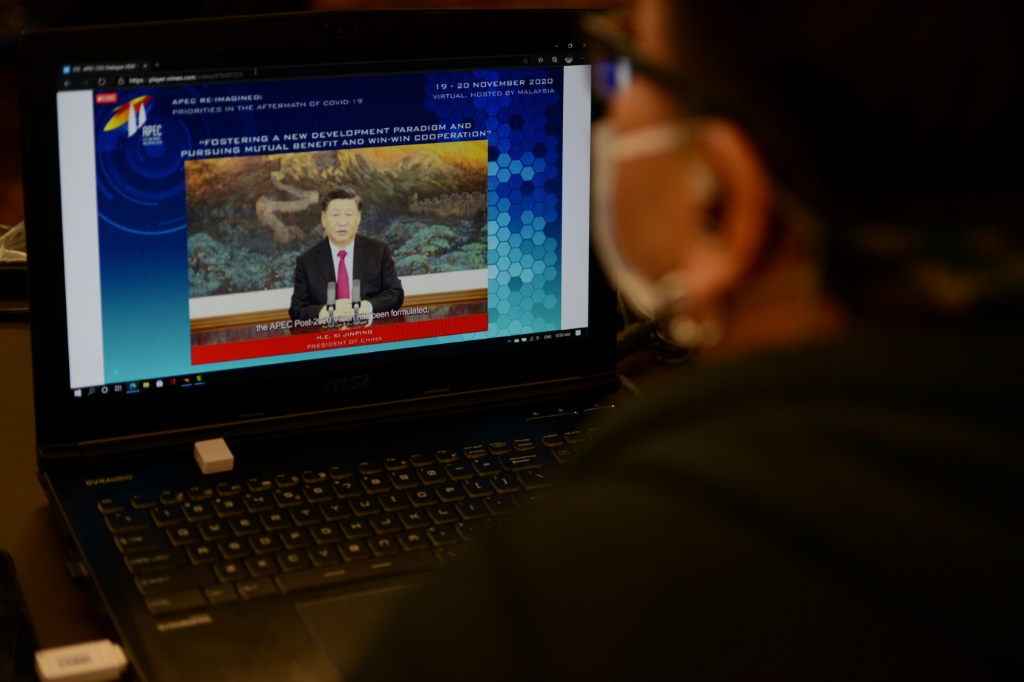 President Xi Jinping pegged China as the pivot point for global free trade Thursday, vowing to keep his "super-sized" economy open and warning against protectionism in a global economy eviscerated by the Covid-19 pandemic.

Buoyed by the signing of the world's largest trade pact over the weekend, Xi said the Asia-Pacific is the "forerunner driving global growth" in a world hit by "multiple challenges" including the coronavirus.

He vowed "openness" to trade and refuted any possibility of the "decoupling" of China's economy -- in his only comments nodding to the hostile trade policy of Donald Trump's US administration, which has battered China with tariffs and tech restrictions.

The Asia-Pacific Economic Cooperation (APEC) forum, held online this year because of the coronavirus pandemic, brings together 21 Pacific Rim countries including the world's two biggest economies, accounting for about 60 percent of global GDP.

It was not immediately clear if Trump, wounded by his election loss to Joe Biden, would take part in the summit or send a high level delegate in his place.

In a speech that veered into triumphalism over China's economic "resilience and vitality" in coming back from the virus, which first emerged in the central city of Wuhan, Xi warned countries who insist on trade barriers will suffer self-inflicted wounds.

"Openness enables a country to move forward while seclusion holds it back," he said.

"China will actively cooperate with all countries, regions and enterprises that want to do so. We will continue to hold high the banner of openness and co-operation."

The high rhethoric may raise eyebrows in capitals where China has either restricted trade, imposed sudden blocks or used its giant economy as a bargaining chip in wider geopolitical plays.

In the APEC region, Australian exports including beef, wine and barley have been disrupted to their largest market, as diplomatic rumble over the orgins of the pandemic as well as alleged antics by each other's spies hammer relations.

The APEC gathering comes a week after China and 14 other Asia-Pacific countries signed the world's largest free-trade deal.

The Regional Comprehensive Economic Partnership (RCEP), which excludes the US, is viewed as a major coup for China and further evidence that Beijing is setting the agenda for global commerce as Washington retreats.

RCEP's rival was the Trans-Pacific Partnership -- championed by former Barack Obama -- but Trump pulled out of it and the pact has been replaced by a watered-down alternative that the United States has not joined.

Xi had no direct words for President-elect Biden, whose ascension to office next year -- while still clouded by Trump's refusal to concede defeat - is seen as likely to see a more naunced extension of Washington's current China policy.

Biden has been strident on China's human rights record, from the Uighur Muslims in its Xinjiang region to Hong Kong's democracy movement.

While he will he cast a more moderate presence on the global stage, analysts say he will seek deeper alliances to hem in Chinese tech - which the US says provides a back door to Beijing -- and trade imbalances.